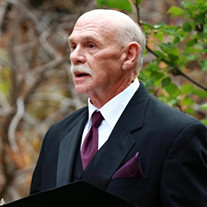 Wynn Allen Webster, (Age 71) passed away at his home in Pateros, WA on January 1, 2018. Wynn was born July 30, 1946 in Omak, Washington to Franklin and Mary Webster. He was raised in Brewster, WA, and graduated from Brewster High School in 1964.He attended Gonzaga University on a math scholarship, but after seeing a play at Fort Wright College (Spokane, WA), he realized his true passion was acting, switched colleges and majors and immersed himself in the world of theatre. Wynn was one of the first male students to graduate from Fort Wright College in 1968 with a bachelor of fine arts degree in drama. Following graduation, Wynn and three fellow acting students co-founded the improvisational theater company Etcetera (ETC) in Seattle, WA. In 1970 he became the technical director for the Seattle based Black Arts West theatre company. Wynn returned to Spokane where he met the love of his life, Chris Tully and they were married on December 29, 1973. In 1972 he was offered the position of technical director for The New Phoenix Theater at the University of Northern Iowa. This theater’s purpose was to introduce inner city black youth to the many opportunities of the theatre. Wynn taught workshops on stage craft and designed and built sets for their theatre productions. Following the closing of the theatre, Wynn and Chris returned to Spokane where Wynn worked as the technical director of Inner Players Ensemble at Fort Wright College for several years. In 1978 Wynn and Chris moved to Brewster where he established Webster Remodel. He was active in this successful business for nearly 40 years. He was an active member of Sacred Heart Catholic Church and chairperson of the Brewster Food Bank. Wynn was preceded in death by his father and mother Frank and Mary Webster, his brother Ron Webster and his nephew Gabe Webster. He is survived by his spouse of 44 years, Chris Webster. He is also survived by his daughter Helen (Shawn) Webster of Clarkston, WA; brothers Jim (Chuan-Chuan) Webster of Tacoma, WA, Kyle (Debra) Webster of Richland, WA, Dan (Kim) Webster of Brewster, WA; sisters Laura Lee (Mark) Brownton of San Bernardino, CA, Fran (Mike) Obermeyer of Spokane Valley, WA, Patty (Mark) Cornett of Albuquerque, NM, Gen (Mike) Isensee of Spokane Valley, WA; his two beloved grandchildren Jillian and Hailey Webster of Clarkston, WA; many nieces and nephews. Wynn’s family will forever miss his sense of humor and storytelling. A funeral mass will be held at Sacred Heart Catholic Church in Brewster on Friday, January 12, 2018 at 11:00 a.m. In lieu of flowers contributions may be made to the Brewster Food Bank, PO Box 826, Brewster, WA 98812. Please feel free to leave any thoughts and memories for the family at www.barneschapel.com. Barnes Chapel of Brewster is entrusted with the services.

Wynn Allen Webster, (Age 71) passed away at his home in Pateros, WA on January 1, 2018. Wynn was born July 30, 1946 in Omak, Washington to Franklin and Mary Webster. He was raised in Brewster, WA, and graduated from Brewster High School in 1964.He... View Obituary & Service Information

The family of Wynn Allen Webster created this Life Tributes page to make it easy to share your memories.

Wynn Allen Webster, (Age 71) passed away at his home in Pateros,...