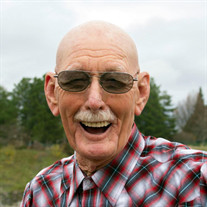 William (Bill) Parker, 83, a long-time Chelan Valley resident, passed away of cancer on November 22nd, 2018 surrounded by loved ones in his home. Bill was born and raised in Perdido, Alabama where he met the love of his life, Loyce Chavers. They eloped when Bill was 20 and Loyce was 17. He and Loyce loved each other deeply every day for 62 years of marriage. Early in their marriage, Bill served in the Navy, and afterwards he and Loyce moved frequently until they finally settled in the Chelan Valley in 1965 where Bill began working for Beebe Orchards. After 40 years of full time orchard work, Bill retired, but still helped during harvests for another 12 years. Bill was well known around Chelan for his deep loyalty and love of people. His work ethic, integrity, faith, generosity, and big heart were his signature traits. He was a loving husband to Loyce, a devoted father to Tammy, and an incredibly kind grandpa to Alex, Emily, and their spouses Beatrice and Joe. He always had an encouraging word and a smile for all who crossed his path. Throughout the years, Bill enjoyed hunting, fishing, square dancing, and gardening, but what Bill really did best was love people. He served in various capacities at his church and at the local food bank. Anyone who got to know him discovered he was a simple man who liked to tease and had a good sense of humor, with a heart as big as he was tall. He loved and served his Lord Jesus Christ and led others to do the same. Though his family and loved ones miss him dearly, they rejoice in knowing that Bill is now with Jesus. Bill is survived by his wife Loyce Parker, his daughter and son-in-law Tammy and Jeff Brown of Spokane, his grandchildren: Alex and Beatrice Brown of Moses Lake and Emily and Joe Studniarz of Boise, Idaho, as well as his siblings Jesse Parker, Idabell Monk, Bobby Parker, and Lil Morton. He was preceded in death by his parents and two of his siblings. There will be a viewing at Precht Rose Chapel from 5 to 7 p.m. on Friday, November 30. A memorial service will be held at 11 a.m. on Saturday, December 1 at North Shore Bible Church in Manson. In lieu of flowers please consider a donation to Living Stone Church or the Lake Chelan Food Bank.

William (Bill) Parker, 83, a long-time Chelan Valley resident, passed away of cancer on November 22nd, 2018 surrounded by loved ones in his home. Bill was born and raised in Perdido, Alabama where he met the love of... View Obituary & Service Information

The family of William Alfred Parker created this Life Tributes page to make it easy to share your memories.