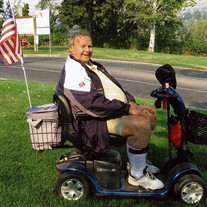 Wayne D. Smith, 84, died on Tuesday, August 12, 2014, following a brief illness at Central Washington Hospital in Wenatchee, WA. Wayne was born on July 29, 1930, to Charles D. Smith and Jennie Mae Smith at Spokane, WA. Wayne lived in Manson until the ninth grade and then transferred to Granite Falls, WA in 1944 and graduated from high school there in 1948. He attended Everett Junior College and graduated from University of Puget Sound in 1955, with a degree in Education. In between college, he was drafted into the Army in 1951 and was sent to Europe as an 889 Quartermaster, served in Germany and France and was discharged in 1953. He married Patricia L. McLaughlin on April 17, 1954, in Yelm, WA. They had four children and were married for almost 41 years until her passing in 1994. Wayne taught at Washington Elementary School from 1955 to 1957 and Wenatchee High School Skiing Team from 1956 to 1961. His team consisted of 24 men and 8 girls. The 4-way competition took 2nd place twice at the state level and they were undefeated three years in a row. Wayne was hired as Vice Principal and Counselor at Chelan Jr. and Sr. High School in August, 1965 to 1978. Wayne enjoyed working in his orchard and spending time at his cabin in Stehekin, fishing with his kids and family. Wayne enjoyed participating in Rotary. He was also a member of the Lake Chelan Boat Club, Lake Chelan Ski Club, Lake Chelan Snowmobile Club and he was a member of the American Legion. He was preceded in death by his wife of 41 years, Patricia L. Smith; his mother, Jennie Smith; father, Charles Smith; sister, Carolyn Ohlson; and brother, Ronnie Smith. He is survived by his son and daughter-in-law, Steve and Cami Smith of Moses Lake, WA; daughter, Sandy Petersen of East Wenatchee, WA; son and daughter-in-law, Scott and Sandy Smith of Kalispell, MT; son and daughter-in-law, Shawn and Jeanna Smith of Manson, WA; grandchildren, Brennen and Cameron Smith, Erin Hamilton and Brandon Petersen, Abbey, Ellie, Olivia and Finnegan Smith, Jennifer and Aaron Lindquist, Natalie and Jason Ten Eyck; four great-greatgrandchildren, Spencer, Parker and Briella, and Jackson. Funeral Services will be held at North Shore Bible Church, Manson, WA, on Saturday, August 16, 2014, at 11:00 a.m., followed by a reception at Lake Chelan Boat Club. Please feel free to leave any thoughts and memories for the family at www

The family of Wayne D. Smith created this Life Tributes page to make it easy to share your memories.