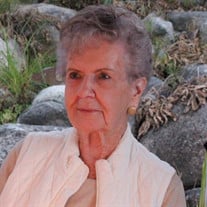 On March 21, 2019 our mom was relieved from her suffering after 365 days of pain. As was her nature, she fought a hard fight. She was known by many names – Mom, Grandma, Great-Grandma, and GG, but the name that she held dearest was “Mrs. Vaughn Godbey.” Her family takes great comfort in knowing that now she is reunited with the great love of her life, her husband, Vaughn – their first born daughter, Marcia – their grandson, Carter – their son-in-law, Ken – plus other loved ones who passed before her. Mom was born on September 18, 1925 in Gove, Kansas. In 1937, her parents decided to leave the “dust bowl” of Kansas. They left in an old Chevy pick-up, with $40.00, a stove in the back, and five children. After many stops along the way to work for money in order to continue their journey, they finally settled in Chelan Falls, Washington. She graduated from Chelan High School in 1943. As her children and grandchildren went through their high school years, she would tell each one, “I never had to read The Grapes of Wrath – I lived it!” As a young woman she was selected as Chelan County War Bond Queen. Her picture was displayed in store windows, and shortly after V-E Day a young man came to Chelan – Vaughn Godbey from Nebraska. He saw her pictures in various windows, then saw her walking across the street one day. He told the man that he was working with, “I’m going to marry that girl!” Mom, however, was not interested. He pursued, she alluded. She always told us girls, “I just knew he was too much for me to manage: so handsome and self-confident.” However, Daddy persisted and won his girl. Five months later they were married on New Year’s Eve. As they said, “we always had a party for our anniversary!” They were two hard working young people who survived the “dust bowl,” poverty, the depression, and WWII. Daddy was the man with the vision, but Mom was the help-mate who helped turn his vision into reality. She always disputed her importance, because she wanted Daddy to have 100% of the credit. Those of us who loved them know that it took two – the perfect match – to make their hard work turn that vision into reality. In 1950, while living in a John Countryman’s cabin in Brewster, Washington, with a three year old, a newborn (who slept in a drawer), a brother and father-in-law, they used Daddy’s money from the GI Bill to start Godbey Red-E-Mix Concrete, Inc. Many years of hard work and sacrifice followed to make their business successful. Years later they purchased Chelan Concrete, Inc. Because “Mr. Wonderful” wanted a family, their lives were blessed with three daughters – Marcia, Portia and Jinx. They, also, suffered great heartache when in 1984 an automobile accident took the lives of their daughter, Marcia, grandson, Carter, and son-in-law, Ken. 18 months later Mom lost the love of her life in a workplace accident. She missed him every day. At her most difficult time, her “Irish Spirit” came through and she gave her trust to her remaining sons-in-law, David Freels & Stephen Pauli, to carry on the family businesses. She would say, “well done, boys” as the businesses grew and are now entering into the hands of the third generation, fulfilling a dream that Mom and Dad invisioned. Us girls always called Daddy “our rock,” but after his death, we soon discovered that Mom was “the foundation” that provided the stability and support. She always denied that, because she always gave Daddy all the praise and credit. However, she truly was “the foundation” that he needed in order for the vision to become reality. Many parts of this eulogy refer to Mom and Dad, because her story in many ways was their story. It was the way she always wanted it, and the way she always told it. Mom lived a long life filled with dignity, hard work, self-sacrifice for family and those she loved, and always striving to be an independent person. She left us all with a great legacy. She believed that love shows itself in discipline, example and sacrifice. We will miss her dearly and will forever be grateful for the lives she made possible for each and every one of us. Every evening when Mom would come to the end of another day shared with Daddy, the last thing she would do is say, “good night, sweet prince.” Her family who so loved her, would like to paraphrase William Shakespeare and say, Good night, Sweet Prince “and his Princess” May flights of angels sing thee to thy rest…! Mom was preceded in death by her husband, Vaughn, daughter, Marcia, grandson Carter, and son-in-law, Kenneth. Also by her parents and all of her siblings. She is survived by her daughters Portia (Stephen) Pauli of Chelan and Jinx (David) Freels of Brewster. Grandchildren Trevor Kelpman, Camisha Hughbanks, Piaget Huewe, Griffin Freels, Chauncy Titcomb, Colton Freels and nine great grandchildren, with another on the way. In lieu of flowers, the family believes that Mom would wish for you to “pay it forward” in her memory. Do good deeds for others when possible, and as you do so remember her with a smile and warm thought. The family would like to thank all of you who gave Mom such loving care during the past year. Everyone at Harmony House, the doctors and nurses at Lake Chelan Community Hospital and at Confluence Health Hospital. Many of you went the “extra mile” and gave her compassion and understanding, which made the past year easier for Mom and those of us who love her. Service decisions will be Monday, April 8, 2019 at the Brewster Seventh Day Adventist Church, followed by the interment to follow immediately at Locust Grove Cemetery in Brewster. The family would treasure any thoughts and memories you have of Wanda at www.barneschapel.com. Services are entrusted to Barnes Chapel of Brewster.

On March 21, 2019 our mom was relieved from her suffering after 365 days of pain. As was her nature, she fought a hard fight. She was known by many names &#8211; Mom, Grandma, Great-Grandma, and GG, but the name that she held dearest was... View Obituary & Service Information

The family of Wanda Darlene (Riley) Godbey created this Life Tributes page to make it easy to share your memories.