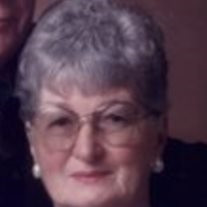 Vida Blanch Butler, 94, of Bridgeport passed away March 31, 2014. She was born August 6, 1919, in Junction City, Oregon along with her twin sister Violet, to John Henry and Stella Mae Beyer. Vida and Violet's older siblings, Roy and Evelyn, were each assigned a twin to look after and even knew their respective baby sister's cry. Vida grew up in the area surrounding Portland, Oregon while her father worked in the lumber industry. She and her siblings enjoyed the beautiful parks in Portland and took advantage of the summer recreation activities they offered. Vida especially loved the softball and basketball programs in which she participated. She made the girls "All Star" team at Roosevelt High School from which she graduated in 1938. Her love of sports continued her whole life and she joined in the women's softball and basketball teams in Bridgeport into her 50's. Vida met Oscar "Dick" Butler while he was working in the navy shipyards during World War II. One of the things they particularly enjoyed doing together was dancing. On October 29, 1942 they were married, and to this union were born Shirley, Larry, Rex, and David. The Butler family eventually settled in Bridgeport in 1956 where Dick was employed by the Corp of Enginers as a powerhouse operator at Chief Joseph Dam. Several hobbies kept Vida busy and gave her family many lovely memories of her. She loved to garden, growing both vegetables and flowers. Her home-made pickles made with cucumbers and dill from her garden couldn't be beat. She enjoyed camping and fishing and she and Dick spent their retirement years traveling and camping in their motor home. They spent many hours fishing in Banks Lake and from time to time their grandkids got to join in on the camping and fishing fun, much to their delight. Vida loved to sew, knit, crochet, and do any kind of crafting. In the homes of all of her kids and grandkids are likely to be afghans or something she made. For many years she played pinochle with a group of 12 ladies from Bridgeport, as she had done with her sisters, brother and their spouses over the many years as well. Vida remained active in her later years, including traveling to Omak to bowl with her team from Bridgeport (all over the age of 80) until she was 89. She won many trophies and "high game" awards over the years. Many of her kids and grandkids have shared her enjoyment of sports, and she loved to watch them playing sports as well. She and Dick were faithful and supportive fans who rarely missed any of their games over many years. Vida was preceded in death by her parents, her siblings, her husband Dick, and by her son Larry. She is survived by daughter Shirley (Dale) Roberton of Brewster, son Rex (Eileen) Butler of Boise, ID, son David (Cheri) Butler of Coulee City, and her grandchildren Kristal (Allan) Hassler of Walla Walla, Larry (Cora) Nordby of Mansfield, Clara (Amine) Tabet of Lausanne, Switzerland, Caroline (Sam) Eichelberger of Fruit Heights, UT, Brett (Shannon) Butler of Layton, UT, Amanda (Nevan) Landreth of Spokane, and Dani Butler of Seattle. She is also survived by 15 great-grandchildren: Garrett and Dylan Greninger, Katelyn Hassler, Beau and Duke Nordby, Killian and Anishay Tabet, Timothy, Caleb, Eliana, and Nathan Eichelberger, Micah and Lucas Butler, Hadley and Lex Landreth, as well as special neices Donna Nelson and Nancy Chadwick. She is also survived by her dear friend of over 50 years, Maedeen Looper. The family wishes to thank those who cared for Vida in her ls days at Holder Colonial Home, Gary and Rose Holder, Jamie Alexander, mary McCann, and the occasional others who filled in being the hands and feet of Jesus, caring for her body and spirit. She truly adopted it as her second home this past year and a half.

The family of Vida B. Butler created this Life Tributes page to make it easy to share your memories.