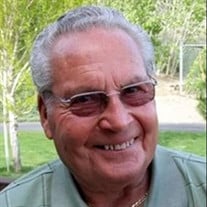 Veryle Miller, 89 years old, went to be with Jesus on December 31, 2019. Veryle was born in Hays, Kansas April 6, 1930. During his childhood his family moved frequently and eventually settled in Lake Chelan, WA. Veryle was drafted into the Army in March 1951 during the Korean War. He married Gloria Dietrich March 3rd (68 years of marriage) just 2 days before leaving for boot camp. During the war he was stationed in Sendai, Japan. In 1953 Veryle received an honorable discharge and returned to Chelan to work for Blair Pontiac. He had a knack and passion for building and customizing cars and various other mechanical equipment. In 1955 Veryle and his wife, Gloria, began farming Apples in the Lake Chelan Valley. He loved being an orchardist and grew top quality fruit. They raised their two children Mark and Kara on their orchard and taught them the values of hard work. Veryle also served on the Chelan River Irrigation District for 30 years and was President for 20 years. Veryle retired from farming in 1994 and enjoyed traveling with Gloria for the next 10 years. Lake Havasu, AZ became their winter home until their grandson began playing college basketball. They then stayed home during the winter to travel to as many games as possible. Veryle loved life and always knew how to have a good time. His sense of humor and laughter was contagious. He had a real gift for telling clever jokes, and the way he’d light up when reminiscing about the good ole days, would make everyone feel like they lived it too. He loved his family and friends with all his heart and was incredibly selfless. He embraced life and lived it fully and actively. Veryle enjoyed water skiing, boating, river rafting, fishing, bowling, hunting, dancing, snowmobiling and taking his grandchildren camping. He was an avid horseman and owned horses for most of his life. Veryle was also an amazing gardener. Friends and family never left without being sent home with beautiful tomatoes. Veryle was preceded in death by his daughter Verlene (1954), son Mark (1977), mother Grace (1995), father Merlan (2000). He is survived by his beloved wife Gloria, Chelan, daughter Kara (Harold) Schell, Chelan, brother Leo (Polly) Miller, Chelan, granddaughter Resa (Jeff) Tucker, Redmond, grandson Calin (Britt) Schell, Bellingham, and many nieces, nephews, and 6 great grandchildren. In Lieu of flowers the family would be grateful for memorial contributions to Chelan Valley Hope. To honor Veryle a Celebration of Life will be held January 19th, at 2:00 p.m. at Campbells Resort- Stehekin Ballroom in Lake Chelan.

Veryle Miller, 89 years old, went to be with Jesus on December 31, 2019. Veryle was born in Hays, Kansas April 6, 1930. During his childhood his family moved frequently and eventually settled in Lake Chelan, WA. Veryle was drafted into the Army... View Obituary & Service Information

The family of Veryle E. Miller created this Life Tributes page to make it easy to share your memories.

Veryle Miller, 89 years old, went to be with Jesus on December...