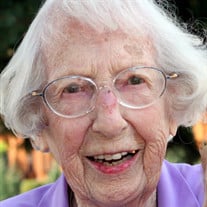 Verona Card Franklin was born on November 2, 1912 at her family's Antoine Creek farm She lived there with her parents and six brothers and sisters all of who preceded her in death As a young child, her family moved back into Chelan. Verona and her siblings got involved in the local schools and church and at some point the family got a piano. Verona learned to play and would do so in church and Eastern Star for many years. As a young woman, Verona babysat, did laundry and worked the counter at the bakery, living with her parents until her marriage to David Franklin on April 20, 1938. They lived in Lakeside until moving to Spokane during the war years where their first son, Richard, was born in 1944. They returned to Chelan shortly after the war was over and lived there contentedly for the rest of their lives. David and his brother Earlynne (Fats) started Franklin Furniture in the late 1940s. After purchasing his brother's share of the business, Verona was very much a co-owner, marketer, salesperson, and bookkeeper. Their second son Jonathan was born in 1951. After retirement, the Franklins were active in the Masonic Lodge and Eastern Star. In 1988 they celebrated their 50th anniversary with a big party of family and friends at the Masonic Lodge in Chelan. Dave died in 1998, several months before their 60th wedding anniversary. Verona was surprised by the "second" life she enjoyed after his death and celebrated her 100th birthday in Chelan three years ago. She loved being surrounded by her family and friends. Verona was a trooper during the recent fires that required evacuation of Heritage Heights. She had a good 103rd birthday and Thanksgiving this year. She died December 19, 2013 Saturday evening, in her sleep. She is survived by her son Richard Franklin of Vancouver (Sharon), Jonathan of Seattle, a grandson Darek Franklin of Boston, MA (April McCalmont), granddaughter Amy Rhoads of Carlsbad CA (Jeff) and her only great grand-child, Daphne Rhoads. We mourn her, surely, but celebrate her long life, well-lived, and her resurrection in Christ. Services for Verona Franklin will be Saturday, January 16, 2016 at 2:00 PM at the Chelan Christian Church. In lieu of flowers, donations may be made to the Chelan Friends of the Public Library.

Verona Card Franklin was born on November 2, 1912 at her family's Antoine Creek farm She lived there with her parents and six brothers and sisters all of who preceded her in death As a young child, her family moved back into Chelan. Verona... View Obituary & Service Information

The family of Verona C Franklin created this Life Tributes page to make it easy to share your memories.