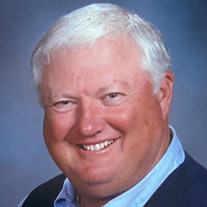 Thomas Eugene Batch, 74, of Manson died Sunday, September 12 from complications of COVID-19 pneumonia. He’ll be remembered for his unshakable optimism, welcoming smile, and love for people. Born November 24, 1946 in Wenatchee to Ed and Winnie (Wright) Batch, Tom took great joy in his family and made new friends wherever life took him. He grew up in Manson and to his last day told stories of his mom’s pecan pie; sneaking off to the lake with his little sister; pulling grandkids behind the boat; state tournaments; baseball, basketball, football and track teammates; fishing trips; and golf trophies. He was blessed to have family and many of his oldest friends close to him in the Chelan Valley. He found a loving partner for life in Linda Crowder on the playground of Manson Elementary School. They dated in high school, fell in love, and married on December 15, 1968 as students at Eastern Washington State College. Tom met lifelong friends in college as a member of the Pi Kappa Alpha fraternity, and a competitive intramural football, softball and basketball player. In 1969, he enlisted in the Air National Guard and trained and served as an air traffic controller in San Antonio, Texas, Biloxi, Mississippi and Spokane. He went to work for General Motors Acceptance Corporation as a credit supervisor and manager in Spokane, Portland and Albuquerque, New Mexico. Tom and Linda grew their family with two sons, Greg and Kyle. Tom coached their basketball, baseball and soccer teams and appreciated every minute of being a dad. In 1986 they moved home to Manson. They purchased the family orchard from Ed and Winnie. While Tom grew apples, pears and cherries alongside his dad and sons, Linda managed the business and family finances and worked for SeaFirst Bank and the Lake Chelan School District. They worked hard together, had successful years as orchardists, and were proud to help their kids get through college and start families of their own. In recent years, Tom stayed connected with fruit growers and friends throughout North Central Washington as a representative for Firman Pollen. He could be seen braving any weather (and even blowing snow off his driveway) in his comfortable cargo shorts. There was nothing he loved more than family visits and stories of his four granddaughters’ adventures and achievements. Tom was proud to be from Manson and dedicated himself to making it better for everyone. He served on the Manson School Board and helped write levies that modernized school facilities in the 1990s. He grew a strong faith in Jesus, served as an elder at North Shore Bible Church, and participated in the construction and expansion of the church. In the apple industry, he was a board member at Trout-Blue Chelan, Inc., and the Washington Growers’ Clearinghouse. He’s survived by his wife Linda (Crowder) Batch; sons, Greg Batch (Kristen) of San Jose, Calif., and Kyle Batch (Sompheng) of Manson; granddaughters, Ruby Batch, Olive Batch, Thea Batch and Evie Batch; and sister and brother-in-law, Kay (Batch) and Roger Fuson of East Wenatchee; sister-in-law and brother-in-law Jackie (Crowder) and Dave Griffiths of Wenatchee; nieces, Kristin (Fuson) Detweiler of Seattle, Kerri (Fuson) Whitworth of Issaquah, Jenann (Griffiths) Ross of Wenatchee, and Mindy (Griffiths) Christopherson of Chelan; and many cousins. He was preceded in death by his parents Ed and Winnie Batch. If you met Tom, he counted you as a friend and you likely counted him as one, too. Special thanks to his last new friends, the amazingly caring nurses and doctors at Virginia Mason Hospital in Seattle. And to his nieces, Kristin Dettweiler and Kerri Whitworth, Seattle area residents who were a loving, comforting presence by his side at the end, we can never thank you enough. A celebration of life will be held at a later date at North Shore Bible Church in Manson. In lieu of flowers, please make a donation in Tom’s name to either North Shore Bible Church or Chelan Valley Hope.

The family of Thomas Batch created this Life Tributes page to make it easy to share your memories.