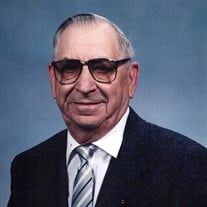 Theodore “Ted” L. Feil, 90, passed away at home in Chelan on Saturday March 14, 2015. He was born October 23, 1924 to J. Joseph and Theresa Feil on their farm in Grandview Washington, the fifth child of seven. They lived on the farm, learning the value of the church community by helping the other families of the area with their farm crops, until 1934 when they moved into town. It was during this time of his life that he met his future wife, Helen Robert. She was sitting under a cherry tree after a Catechism class when he got up the courage to talk to her. . Ted graduated from Grandview High School in 1943 and promptly signed up to join the Cadets. He had already received his pilot's license in 1942 through the Civilian Air Patrol. However the Army decided he wasn't qualified for the Cadets, so he was sent to the armament school and was trained as a gunner in B24 bombers. He was sent to fly missions in the China, Burma, India theater. He was honorably discharged in November 1945 as a Staff Sergeant, having earned an Air Medal for 100 hours of flying combat missions, the First Oak Leaf Cluster to the Air Medal for 200 hours, and the Distinguished Flying Cross. After two years at Gonzaga College studying Mechanical Engineering, Ted started his career with the government working for the Corps of Engineers as a Surveyor. He also had his first date with Helen in July of 1949. They married on September 6, 1950 at St. Joseph's Catholic Church in Sunnyside and started their family. He went to work for the Bureau of Reclamation in 1953 and continued with them for 33 years, moving with the jobs throughout Washington and Oregon, settling in Chelan in 1969. As a family man, Ted was very supportive and proud of all his children's accomplishments, interacting with them while they were young, and participated by becoming a baseball umpire for a few years. A devoted Catholic, he was a member of the Knights of Columbus for over 65 years and was one of the first Eucharistic Ministers anointed in Chelan. He will be greatly missed by his surviving brother Joe Feil, his eight children Marie Palmer of Manson, Stephen Feil of Bonita Springs Florida, Teresa (Ray) Eaks of Edmonds , Joan Friar of Chattanooga Tennessee, Monica Stokes of Wenatchee , Lawrence (Joan) Feil of Burien , Thomas Feil of Chelan, and Timothy (Denise) Feil of Seattle; his seven grandchildren Cindy, Michael, Colette, Kimberly, Nathan, Isaac and Anthony; his five great-grandchildren Molly, Gunnar, Coltin, Alexandria, Annabelle, and Baby Stokes due in May; along with many cousins, nieces and nephews. There will be a grand reunion in Heaven, as Ted was preceded in death by his parents, his sister Mary, and brothers George, John, Dick and Leo. He is now with his wife of 58 years, Helen, who preceded him in 2008. They are finally together again, Mom sitting in her chair either knitting or crocheting and Dad in his chair watching football or working the crossword puzzle in the daily paper. Memorial services will be Friday, March 20, 2015 at St. Francis Catholic Church in Chelan starting with viewing at 9:30 am, recitation of the Holy Rosary at 10 am, and Mass of Christian Burial immediately following. Interment will be at Riverview Cemetery after Mass.

The family of Theodore Lawrence Feil created this Life Tributes page to make it easy to share your memories.