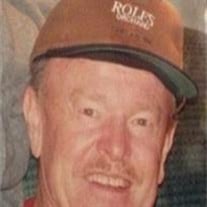 Long time Chelan resident, Steve Rolfs, was surrounded by loving family and friends when he passed away Thursday evening, April 25, 2013, at the age of 70, while at the VA Hospital of Seattle. Recent repeated surgical interventions, related to his long-standing Crohn’s disease, overwhelmed his strength and he was unable to recover. Steve was born May 17, 1942, in Wenatchee. He grew up in East Wenatchee, graduating from Eastmont High School in 1960. He attended Central Washington University (before and after his military service), graduating in 1968 with a degree in Business. On November 14, 1965, he entered the U. S. Navy where he eventually reached the rank of Storekeeper Seaman Apprentice E-3 until he was medically discharged September 22, 1967. On July 8, 1967, he married Marsha Kay Atwood of Wenatchee, and they eventually established their family home on the shore of Lake Chelan, where they have lived since 1969. Following his discharge from the Navy, Steve worked for H. R. Spinner Co. (now Wilbur-Ellis Co.), as a Warehouse Manager, in Chelan, leaving in 1984 to become a successful apple orchardist. Nurturing and harvesting fruit crops was a special joy to Steve; and he earned coveted awards for his fine skills as an orchardist, eventually retiring in 2006. Community interests included membership with the Chelan Jaycees. In addition to enjoying his orchard work, Steve took great pride in the care of his home; collecting Amish-related artifacts, Chelan post cards, and truck banks; and traveling (his favorite spot was Hawaii). He had a great eye and love for taking pictures. Special joys of his life were his granddaughters; hosting annual reunions of family and high school classmates; and enjoying coffee gatherings with former colleagues and friends at the Wilbur-Ellis warehouse. Steve is survived by his wife, Marsha; children Jason (Becky) Rolfs of Malaga, and Andy (Kris) Rolfs of Rocklin, California; grandchildren Cassie, Katie, Audrey and Meredith; brothers Bob (Pat), Tom (Dian) and John (Judy); and numerous nieces, nephews and cousins. He was preceded in death by his parents, Archie and Magdalyn, and his beloved daughter Katie. Everyone will miss his zest for life and friendly outgoing personality toward everyone he met. A “Celebration of Life” service will be held at the LDS Church on Monday May 6th at 11AM. Memorial gifts in Steve’s honor may be made to VA Puget Sound Fisher House, 1660 S. Columbia Way, Seattle, WA 98108; or to the Katie Rolfs Memorial Scholarship Fund, Community Foundation of North Central Washington, 9 South Wenatchee Ave, Wenatchee, WA 98801. Following cremation, Steve will be interred next to his daughter, Katie, at the Chelan Fraternal Cemetery.

Long time Chelan resident, Steve Rolfs, was surrounded by loving family and friends when he passed away Thursday evening, April 25, 2013, at the age of 70, while at the VA Hospital of Seattle. Recent repeated surgical interventions, related... View Obituary & Service Information

The family of Steven Rolfs created this Life Tributes page to make it easy to share your memories.