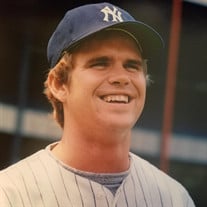 Steven “Steve” Kline, 71, passed away peacefully at home on June 4, 2018 in Chelan, Washington. He is survived by his wife Linda currently in a care center; daughter Kelly; son Ty and granddaughter Rian, all of Aloha, Oregon. He was preceded in death by his brother Christopher Kline of Wenatchee, and parents Irene and Jack Kline of Chelan. Steve was born on October 6, 1947 in Wenatchee to Jack and Irene Kline. He graduated from Chelan High School in 1966 where he was active in scouting programs and an outstanding pitcher on the high school baseball team which went undefeated during Steve’s high school career. He and his wife Linda, a flight attendant on a major airline, were married in 1973. Steve was drafted by the New York Yankees in 1966 upon his graduation from Chelan High School, and pitched for the Yankees until 1974 when he was traded to the Cleveland Indians. Later, in 1977, he was traded to the Atlanta Braves, but retired from Major League Baseball that year. Steve also served in the Army Reserves from 1968 to 1974, during the Vietnam conflict. He was proud to serve his country in the Reserves. Steve and his wife eventually settled in Portland, Oregon where he worked as a Lumber Broker for 30 years and where he and Linda raised their two children. He was active in the baseball community in Portland, coaching teams for both his son and daughter and, as they grew and moved on to different teams, he was the pitching coach for Jesuit High School and gave lessons to promising athletes before retiring to Chelan where he was an active member of the community. Once Steve returned to the Lake Chelan Valley, he found great pleasure in fishing local streams and lakes and reconnecting with his high school friends. He worked with Meals on Wheels delivering meals to senior citizens in and around Lake Chelan; volunteered at Re-Runs, a second hand store at Chelan Station which benefits the Chelan Senior Center; and continued to offer coaching tips to many youth in the area, including assisting with teams at Chelan Brewster, and Wenatchee High Schools before retiring from coaching. He has been a large and vocal advocate to bringing affordable housing to the Lake Chelan Valley and increasing public access to Lake Chelan. His magnanimous personality will be missed. A memorial service for Steve Kline will be held at Chelan High School June 23, 2018 fro 2 to 5 PM. Precht Rose Chapel is in charge of arrangements. Please make donations to honor Steve Kline at Home Delivery Meals or an organization of your choosing within the Lake Chelan Community.

Steven &#8220;Steve&#8221; Kline, 71, passed away peacefully at home on June 4, 2018 in Chelan, Washington. He is survived by his wife Linda currently in a care center; daughter Kelly; son Ty and granddaughter Rian, all of Aloha, Oregon. He... View Obituary & Service Information

The family of Steven Jack Kline created this Life Tributes page to make it easy to share your memories.

Steven “Steve” Kline, 71, passed away peacefully at home on June...