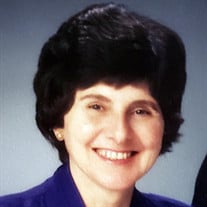 Sandra Wall went home to be with her Lord and Savior Jesus Christ on September 5, 2019 after a lengthy struggle with Alzheimer’s disease. Sandra was born Alexandra Cecilia Stamolis to Philip and Phyllis Stamolis on April 18, 1940 in Ellensburg, Washington. The family moved back to Seattle and Sandra graduated from Queen Anne High School in 1958. She continued in her studies at the University of Washington graduating with a degree in political science in 1962. She married the love of her life, John Wall, on December 15, 1961 and they shared a beautiful life together for almost 55 years. After spending the first nine years of their life in the greater Seattle area, they moved to Chelan in 1970. Sandra was involved in all aspects of the family apple orchard beginning in 1976, and she also loved gardening. She could grow almost anything…and did…from tomatoes and cucumbers to raspberries and corn. Sandra’s faith and family were the most important parts of her life, as she gave so unselfishly for many years raising her four children. As her children grew older, she served for a number of years on the Lake Chelan School District board of directors, retiring in 1991. Her later years were spent at home with her husband enjoying her children and grandchildren. She was truly the most amazing mother and loving grandmother, as she would literally drop everything to be with her family and help in any way possible. Without a doubt she was greatly loved and will be missed. She was preceded in death by her husband John in 2016, her sister Sylvia in 1970, her father Philip in 1964 and her mother Phyllis in 2000, as well as daughter Kelly in 1991. Survivors include her sons John of Pateros, Washington, David of Wenatchee, Washington, and Scott of New York. She is also survived by her brother George of Fresno, California, and grandchildren Luke, Emily, Isaac, Ethan, and Tedi, as well as great grandchildren Gideon, Boaz, Niyah, Eli, and Lydia. A combined celebration of life service for both Sandra and her husband John will be help Saturday, September 21, 2019 at Christ Center Chelan, 204b E. Okanogan Avenue, Chelan, Washington. Precht Rose Chapel of Chelan is entrusted with arrangements.

Sandra Wall went home to be with her Lord and Savior Jesus Christ on September 5, 2019 after a lengthy struggle with Alzheimer&#8217;s disease. Sandra was born Alexandra Cecilia Stamolis to Philip and Phyllis Stamolis on April 18, 1940 in Ellensburg,... View Obituary & Service Information

The family of Sandra Cecilia Wall created this Life Tributes page to make it easy to share your memories.

Sandra Wall went home to be with her Lord and Savior Jesus Christ...