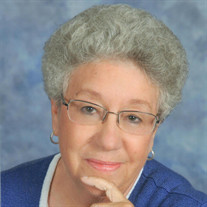 A memorial will be held Saturday, May 19, 2018 at 10 AM at North Shore Bible Church. Inurnment will immediately follow. Sandra McClellan passed away peacefully in her home in Manson with her family at her side on May 5, 2018. She was born to Aliene (McKnight) & Elbert A. Hubbard, Sr., on May 25, 1936 in Manson, WA. She joined her older brother, Elbert, Jr., and would welcome 3 more brothers to the family, Gary, Duane & Jon. She always said she was the Hubbard sister no one knew. However, fame came to her early in life when at the age of 7 she was chosen queen of the Manson Apple Blossom Festival, standing in for the queen who had gotten the mumps. Her family knew her well,too, for all the sumptuous family dinners she hosted, the many 4th of July fireworks viewing parties and the loving care she lavished on her sons and grandchildren. Sandra married Jim McClellan in 1960 and together they raised Jerry, Jim & Jeff, living much of those in Manson and with 3 years in East Wenatchee. In addition to caring for her family she worked at many restaurants and packing houses in the Chelan and Wenatchee valleys, the majority of those spent at Trout-Blue Chelan. Her first, and perhaps her hardest job, was spending a summer at Stehekin working as prep-cook, waitress, dishwasher and clean-up crew with her good friend, JoAnne McClain, whose parents operated the Golden West Lodge. Getting up at the crack of dawn, preparing tables and food for patrons when they disembarked from the Lady of the Lake and Speedway ferries was a challenge for the two high school friends. Sandra and Jim enjoyed traveling around the state by motorcycle and camping with friends. They owned and operated an orchard and fishing resort on Roses Lake in Manson. After her retirement she devoted herself to her grandsons, Curtis & Kelly, and helping out her dad and step-mom. A highlight in 2007 was taking a tour of Ireland and Scotland with Elbert & Hannah. Whether visiting castles, cathedrals or especially the shops, she was usually the first one off the bus. It was a memorable trip for all three. The crowning jewels of Sandra's last 8 years have been her darling twin granddaughters, Zoe and Haley, who have blossomed under her loving grandmotherly care. Preceding her in death were her son, Jeff, husband, Jim, and her parents. Surviving her are brothers Elbert (& Hannah), Gary, Duane & Jon, her sons Jerry and Jim, grandchildren Mark Ellliot, Curtis, Kelly, Haley & Zoe McClellan, great-grandson Liam Elliot and many nieces and nephews. Sandra was blessed to spend her last days in her own home because of the loving care of her daughter-in-law, Nancy Couch, her devoted son, Jim, with the help of Home Health and Hospice nurses. She is at peace with her Lord Jesus. In lieu of flowers, donations may be made in her memory to the American Cancer Society (P.O.Box 34475, Seattle WA 98124-1475)

A memorial will be held Saturday, May 19, 2018 at 10 AM at North Shore Bible Church. Inurnment will immediately follow. Sandra McClellan passed away peacefully in her home in Manson with her family at her side on May 5, 2018. She was born... View Obituary & Service Information

The family of Sandra Jean Hubbard McClellan created this Life Tributes page to make it easy to share your memories.