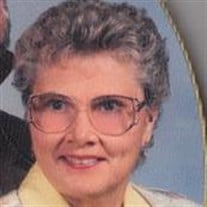 Ruth Viola Giffin May 10, 1925 – April 10, 2015 Our Lovely Mother, Ruth Viola Giffin, went to be with her Lord and Savior April 10, 2015 with friends and family at her side. Ruth Folkestad was born May 10, 1925 at Clinton, Minnesota to Jacob and Ida Folkestad, and was the second to youngest of nine brothers and sisters. Early life was spent on the family farm. The Great Depression and World War II impacted the family and the farm. In 1941, Ruth, at age 16, took the train from Minnesota to Yakima, Washington to live with her sister and her husband, so she could attend high school. Through family, she met the Love of Her Life Wayne Giffin, and they were married July 11, 1942. They enjoyed life, love, and happiness until Wayne’s death in 2008, a few weeks short of their 66th wedding anniversary. Wayne and Ruth lived and worked in Yakima prior to moving to Leavenworth in 1952. Wayne was a manager of Moettler Orchards and Ruth worked at Columbia Market. While in Leavenworth, Ruth and Wayne made many lifelong friends. In 1958 they moved the family to Chelan. where Ruth worked for a short time at Safeway. Later she worked for over 25 years at Seattle First National Bank, which later became Bank of America. She retired in 1979. Throughout Ruth’s career at the bank, Wayne and Ruth were orchardists in Manson. Ruth was a member of Lake Chelan Community Hospital Guild E, and a 40 year Member of the Lake Chelan Eagles Auxiliary. Ruth is survived by one brother, Milton Folkestad of Salem, Oregon; four children, Terry Giffin, Wenatchee; Mike (Carol) Giffin, Manson; Roberta Giffin, Chelan; and Roxanne Giffin, Manson. Ruth is also survived by nine grandchildren ,Travis Giffin, Holli Giffin, Marc Spears (Dawn); Tracy Pickeral (Corey); Tim Spears (Tiffany); Erin Peistrup (Brad); Kell Giffin (Jessica); Tylar Self (Janet); and Stellan Giffin; and 11 great-grandchildren. A Memorial Service and Celebration of Life will be held at the Lake Chelan United Methodist Church on Saturday, April 18, 2015 at 1p.m. Private Interment will be held at a later date. Memorials may be made to the Lake Chelan United Methodist Church or the Chelan Senior Center.

The family of Ruth V. Giffin created this Life Tributes page to make it easy to share your memories.