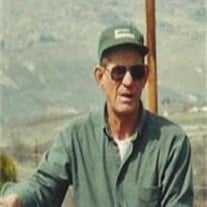 Roger Robinson was born March 21, 1944 in Fayetteville, Arkansas to Wayne and Ruth Robinson. At a young age, they moved from Arkansas to Chelan Falls, Washington. Roger attended Chelan School District until his family moved to Manson where he graduated in 1962. He attended Tech School in Tacoma and worked for A.Z. Wells Fruit Company as a refrigeration supervisor and mechanic from 1965 to 1985. He married Linda Abbott March 25, 1967. Roger and Linda owned and operated their family orchard for 36 years before retiring in 2011. He had a passion for his family and living life to the fullest. Roger enjoyed camping, and spending time following his children to their numerous sporting events and continued this on with his grandchildren. He was a loving husband, father, grandfather, son, brother and friend known for his endless patience and kindness. His extended family remembers him as a man who was there when needed in a family emergency. His friends knew him as kind, loving man and a devout Christian. On Sunday morning February 17, 2013, he went home to the lord surrounded by his loving family at his home in Chelan. He is survived by his wife of 46 years, Linda; his children daughter Sherri and Shane Jones (Madalyn and Gabryel) and sons, Marty and Nicole Robinson (Derek and Logan) and Ryan and Leslie (Austyn, Peyton, Anika, Gunnar and Kolton); his mother Ruth Robinson; and his sister Brenda Burgett. He was preceded in death by his father Wayne Robinson, Grandmother Cora and beloved four-legged companion Luke. Services will be Saturday, February 23, 2013, 11:00 am at the Pateros Community Church, Pastor Phil Smith officiating. The family requests at Roger’s wishes to have donations made to the Wenatchee Valley Humane Society in lieu of flowers. Please feel free to leave comments and share stories for others to see.

Roger Robinson was born March 21, 1944 in Fayetteville, Arkansas to Wayne and Ruth Robinson. At a young age, they moved from Arkansas to Chelan Falls, Washington. Roger attended Chelan School District until his family moved to Manson where he... View Obituary & Service Information

The family of Roger Robinson created this Life Tributes page to make it easy to share your memories.