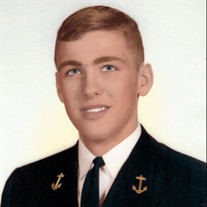 Bob Kirk passed away unexpectedly at home in Brewster on Thursday evening, February 28, 2019. Robert Wayne Kirk was born in Wenatchee to Warren C. Kirk, Jr. and Dorothy Kline on May 14, 1948. His father, a Navy Pilot in the Pacific during WWII, had a major influence on Bob. He graduated from Brewster High School in 1966, where he loved football, basketball, and track. He had success in the javelin going to the state meet. After graduation, he was appointed to the US Naval Academy. He continued his sports pursuits at the Naval Academy with some success in the javelin. He graduated in the summer of 1970 and was assigned to Long Beach California, where he married his college girlfriend, Jean Otter, from the Annapolis area. In the mid-1970s, as the Vietnam conflict escalated, Bob was assigned as an officer on various vessels stationed at Pearl Harbor. In 1979 he was an officer on the USS Benjamin Stoddert which took a dependent cruise from Oahu to Hawaii and return for Mother’s Day. Jean, his wife; Elsie Kirk, his grandmother; Dorothy Kline, his mother; and Warren Kirk III, his brother, and wife, Helen, and son, Chip, all joined him on this cruise to Hilo. A strong storm came on the island the night before we were to return to Pearl Harbor, and Robert was asked by the Commander to be at the helm. The Commander at Pearl Harbor had recently honored him by nominating him as the Best Shiphandler in the Squadron at Pearl Harbor! Bob was elevated to the rank of Lt. Commander while he was at Pearl Harbor. Robert deployed several times in the Pacific which caused a strain on his marriage which ended in a divorce when he was reassigned to the US Navy War College in Newport, Rhode Island in the early 1980s. They never had any children. After several years at the War College, Robert returned to an assignment in Hawaii at Pearl Harbor. In the early 1990s Bob retired as a Lieutenant Commander from the US Navy and soon returned to Washington State and purchased a home in Lynnwood. Bob never had much of a love for traveling after he retired and always remained close to the Brewster area. Bob made an exception and did fly to his brother’s graduation from United Theological Seminary in Dayton, Ohio, in 2006. As his Mom’s, Dorothy Kline, health (dementia) continued to get decline, Bob’s first priority was to take care of her. When Dorothy was moved to Wenatchee, Bob virtually went with her, living with her in her two bedroom apartment. When Dorothy continued to decline and needed full-time care she was moved to Harmony House in Brewster and Bob moved to Brewster, virtually visited her every day he wasn’t in Seattle at the Veteran’s Hospital for an appointment. Bob kept close contact with several close friends in the Brewster area. Bob was predeceased by his Father; and is survived by his Mother, Dorothy Kline, who is living in Harmony House in Brewster; his Brother, Warren (Chip) and wife Helen living in Southern Indiana; his nephews: Warren Charles IV and his family living in Gardnerville, Nevada; and Ryan Derek and his family living in Lawrenceburg, Indiana. He has three great nephews and a great niece. Years ago he loved his motor cycle and he still owned the first Ford Mustang sold in Brewster in 1964. A memorial service is planned for Friday, March 8th at 11:00 am at Barnes Chapel in Brewster, Washington with a graveside service immediately following at Locust Grove Cemetery. Gifts in memory can be donated to the Brewster American Legion for a scholarship fund in memory of both Warren Charles Kirk Jr. and Robert Wayne Kirk.

Bob Kirk passed away unexpectedly at home in Brewster on Thursday evening, February 28, 2019. Robert Wayne Kirk was born in Wenatchee to Warren C. Kirk, Jr. and Dorothy Kline on May 14, 1948. His father, a Navy Pilot in the Pacific during... View Obituary & Service Information

The family of Robert Wayne Kirk created this Life Tributes page to make it easy to share your memories.

Bob Kirk passed away unexpectedly at home in Brewster on Thursday...