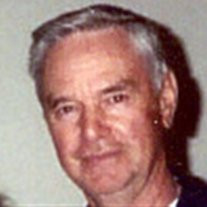 December 20, 1922 ~ October 8, 2013 Bob Cooke was born in Ellensburg, WA on December 20, 1922 and died on October 8, 2013 in Wenatchee, WA. His parents, Chester and Winnifred Cooke were one of the first settlers in Kittitas County. Bob grew up in the Camas Land on Blewett Pass, where his family had a homestead. He attended school and worked hard, as his family had a dairy farm. Bob enlisted in the Navy right out of High School and served in the South Pacific during World War II. While serving his country, his first ship was blown up and he continued to serve on other ships. Bob began working as a foreman for the State Department of Highways on Stevens Pass. He worked in this position for 14 years and during that time, while on duty, was buried in avalanches five times and came out of each situation uninjured. While working on the pass, he met and married Robin. They were married in Coeur d’Alene, ID and moved to Chelan, WA with Robin’s three boys from a previous marriage. Bob, as a heavy equipment operator, built many roads around Lake Chelan over a period of many years. If you drive around Lake Chelan on back roads, chances are you are driving on a road Bob Cooke graded. If there was a challenging construction project, Bob was the one other contractors called, as with his expertise he was able to complete the project successfully. Bob and Robin lived on Lake Chelan near the Yacht Club for over 50 years. In 2005, Bob and Robin moved into the town of Chelan. Bob was a devoted husband, father, and grandfather. Bob was preceded in death by, his parents, Chester and Winifred; one brother, Bruce; three sisters, Ruth, Dorothy, and Francis; and one stepson, Joel Lawrence (Nancy Lawrence also deceased). He is survived by his wife, Robin Cooke; two stepsons, Bob Lawrence (Norma Lawrence) of Savanna, GA and Tom Lawrence (Kristin Lawrence) of Brush Prairie, WA; seven grandchildren; six great-grandchildren; and several nieces and nephews We love Bob and will miss him dearly. Friends are invited to join the family to help celebrate Bob’s life. Please join us at a Memorial Service that will be held on Tuesday October 15, 2013 at 1:00 p.m. at the United Methodist Church in Chelan, WA. Precht Rose Chapel of Chelan is in charge of arrangements.

The family of Robert Allen Cooke created this Life Tributes page to make it easy to share your memories.

Bob Cooke was born in Ellensburg,...