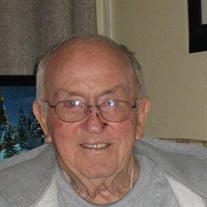 Robert Dudley Carleton, Sr., ”Bob” died at the age of 93 on October 8, 2014 at Memory Haven in Sumner, Washington. Bob was born on January 24, 1921, to Guy and Ada Carleton in Manhasset, New York. He was raised with his siblings, Jean & Ed, in Manhasset but the family spent much of their summers at their cabin, OWA-ETCA, in the New York Adirondacks where he grew to love everything to do with the outdoors. Bob enlisted in the Navy in 1942 and in his early years served on the USS Yorktown “The Fighting Lady” as a pilot flying F6F (Hellcat) during WWII. Bob married Mariruth Hartquist, “Harky”, on July 21, 1945 and after WWII they were stationed back in New York where Bob finished his degree at Columbia University. Bob went on to learn to fly helicopters becoming the 33rd endorsed helicopter pilot in the US Navy and from there he trained pilots to fly helicopters, helping to fill the high demand. Bob retired from the US Navy in 1963 as a Lt. Commander. Stationed in Washington State 3 times during his service in the Navy, Bob and Harky decided they wanted to retire there to raise their family. During his last year in the service Bob came to the Chelan valley and purchased an orchard in Manson where he and Harky became an intricate part of the community. Bob enjoyed life as a farmer and served on the Board of Directors with the Trout Fruit Co-op for many years. He was the local Scoutmaster for the Boy Scouts and shared his love of hiking and the outdoors with the youth in the community while his children were young. He was an active member of the Manson Kiwanis club and spent many hours helping with local community projects and especially enjoyed cooking chicken for the annual BBQ. He also became involved with the local Habitat for Humanity and helped to build 11 houses in the community for families in need. After his children finished school Bob and Harky purchased a private plane and rekindled their combined love of flying. They began fulfilling their dreams of travel and visited family, and friends that they had accrued over their years in the Navy, in all corners of the United States. They also explored outside the US in their plane taking it through Canada to Alaska and down through the Copper Canyons of Mexico. Bob and Harky’s travel adventures took them all over the globe including several trips to Africa, Australia, Europe, Asia, South America, and beyond. Bob continued to fly his plane until he grounded himself at the age of 86. Bob is preceded in death by his mother, Ada, and father, Guy, sister Jean Hill, brother Edward Carleton, son, Craig Timothy (1956), daughter, Deborah Jean Rucky (1987), son-in-law George Lundstrom, and his wife of 56 years, Harky (2002). Bob is survived by his children and their spouses, Robert Jr. and Terrie Carleton of Manson, daughter Teresa “Terry” and Dave Maczuga of Bellingham, and daughter Regina “Reggie” and John Albert of Puyallup. He also has 5 grandchildren, Christer, Megan, Ryan, Drew, & Neil, and 4 great grandchildren, Harper, Penley, Cooper and Porter. Graveside services for Bob will be at Chelan’s Fraternal Cemetery Saturday, October 18, 2014 at 10:00 A.M.. There will be a reception to follow. In lieu of flowers, please consider supporting a community non-profit such as Habitat for Humanity, Manson Kiwanis or Echo Valley Ski Area.

The family of Robert Dudley Carleton Sr. created this Life Tributes page to make it easy to share your memories.