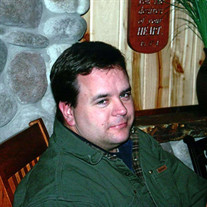 Robert N. (Bob) Brammer, 47, apple grower, whiskey maker, world traveler, trained engineer, former soldier, and treasured husband, father, brother, brother-in-law, uncle, and friend, passed away suddenly on May 18, 2015. The baby of the Brammer family with an adventurous and exuberant spirit to match, Bob came into this world on January 10, 1968, in Townsend, Montana, the youngest of five children born to Jerry Brammer and Fleda Brammer (née Albertson). Following his graduation from Broadwater County High School in 1986, Bob enlisted in the US Army, serving on active duty in the Signal Corps from May 1987 until June 1991. During the Gulf War, he served in combat in Saudi Arabia as a sergeant assigned to support communications for the 18th Airborne Corps. He continued to serve in the Montana Army National Guard until December 1996, earning awards as Montana’s Aviation Soldier of the Year and Noncommissioned Officer (NCO) of the Year. After returning from the Gulf War, Bob enrolled in Montana State University in Bozeman, where he met his wife, Karin Roose. The two were married in Townsend on March 12, 1994, and their only child, his beloved Margie Katherine, was born on August 31, 1995. In 1996 Bob graduated with an Electrical Engineering degree from Montana State, and the family moved to Brewster, Washington. There, Bob joined the management team of Crane and Crane Orchards, an apple-growing operation that had been in Karin’s family for several generations. Bob eventually became an owner and served as vice president and president for many years. During his years in Washington, he served on the Water Conservancy Board in Waterville and volunteered with numerous school- and sports-related organizations in Brewster and the surrounding areas. In 2011, Bob left Crane and Crane to pursue a new career, opening a distillery. He researched distilling practices around the world and traveled as far as Japan to purchase equipment. Unfortunately, his health and time did not allow his dream business, Bold Spirits, in Pateros, Washington, to be realized. In recent years, along with his two brothers and brother-in-law, Mike, Bob journeyed twice to Africa to volunteer his time and engineering skills to Compassion Tanzania, a Montana-based nonprofit that provides wells and clean drinking water to remote villages in the region. He was incredibly proud to have been accompanied by his daughter, Margie, and niece Alexandra on his most recent trip to Tanzania. Bob’s sense of adventure also took him to other far-flung locations around the world, including New Zealand and Antarctica. Bob was devoted and very present in his daughter, Margie’s, life. He cared that she pushed herself to be her best and he cared that she was a supportive teammate and friend. Volleyball, basketball, club volleyball, tennis and track -- he was there through it all challenging her, teasing her, and loving her. Bob will be remembered for his unwavering selflessness as a provider and caregiver, his wicked sense of humor, his humble yet intrepid spirit, and his role as chief instigator of food and water fights at Brammer family gatherings. Left to cherish these memories are his wife, Karin, of Pateros; his daughter, Margie, a student at Gonzaga University; his sister Jill Mortensen and her husband, Gregg, of Bozeman, Montana; his brother David Brammer and his wife, Kathy, of Helena, Montana; his brother Jim Brammer and his wife, Sue, of Dillon, Montana; his sister Kim Ferguson and her husband, Mike, of Red Lodge, Montana; honorary brother John Huth of Helena, Montana; stepfather Dave Campbell of Missoula, Montana; and numerous nieces, nephews, and in-laws. Bob was preceded in death by his father, Jerry Brammer; his mother, Fleda Brammer Campbell; his niece Melissa Brammer; and his nephew Matthew Mortensen. Celebrations of Bob’s life will be held at the Brewster High School Gymnasium at 2:00 p.m. on Sunday, May 31, 2015, and on a date to be announced in Montana. The family requests that donations be sent to the Washington Apple Education Foundation (2900 Euclid Avenue, Wenatchee, WA 98801) or to the Wounded Warrior Project (woundedwarriorproject.com/donate).

The family of Robert N. Brammer created this Life Tributes page to make it easy to share your memories.