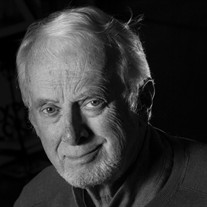 Richard J. Simonds passed away on Saturday, June 15, 2019, at the age of 85. Richard was born on July 15, 1933, in Winchester, MA, to Donald and Florence (Cady) Simonds. He attended prep school at Hebron Academy, received a degree in economics from Tufts University and an MBA from University of Chicago. He served in the US Navy as Lieutenant JG on the Naval Ocean Tugboat, USS Hitchiti at Pearl Harbor, HI, serving as the navigator as well as deep-sea diver. He met Roberta Little from Chelan, WA, while in Hawaii, and they were married in Chelan in 1960. The Simonds made their home in Wheaton, IL, from 1965 – 1998 where they raised two sons, Derrick and Andrew. He and his family enjoyed weekends at the historic family property of Pier Cove, MI, where he helped establish the Pier Cove Ravine Trust. Dick was a smart, creative and easy-going man with a lot of friends and a passion for hobbies and activities. He grew up in a sailing family and sailed competitively all his life. He was a licensed glider pilot as well as a master woodworker, building wooden boats in his free time. He was a musician and played the clarinet and enjoyed listening to jazz and classical music. He loved golf, playing all his life and always choosing to walk instead of ride whenever he could. He played often at historic Chicago Golf Club where he also served as president. Dick spent his professional career as a corporate insurance broker in Chicago with Aon Corp. Dick and Roberta retired to Chelan, WA, in 1998 where he volunteered as president of the Lake Chelan Rotary Club and president of the Lake Chelan Historical Society. He was proud of rowing his home-made rowing shell the entire length of Lake Chelan to raise money for the Chelan Historical Society. He was well known for a Saturday radio segment called “Nugget of Knowledge” on Chelan’s KOZI radio station, where he shared stories of historical events in and around the Lake Chelan area. Dick is survived by his wife Roberta “Peach” Simonds, sister Joanne Scott, sons Derrick “Gus” and Andrew, and grandchildren Chelan, Madison, Colton and Dexter. A private celebration of his life will be planned for later this summer. Memorials can be sent to the Lake Chelan Historical Society (P.O. Box 1948, Chelan, WA 98816) or the Pier Cove Ravine Trust (2264 Lakeshore Drive, Fennville, MI 49408).

Richard J. Simonds passed away on Saturday, June 15, 2019, at the age of 85. Richard was born on July 15, 1933, in Winchester, MA, to Donald and Florence (Cady) Simonds. He attended prep school at Hebron Academy, received a degree in economics... View Obituary & Service Information

The family of Richard James Simonds created this Life Tributes page to make it easy to share your memories.