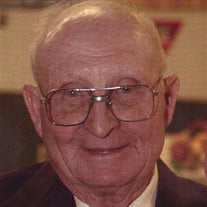 Richard B. “Dick” Bennett, 90, died of natural causes at his home in Brewster, WA on Sunday, August 17, 2014. Dick is survived by his loving wife of 69 years, Shirley A. Bennett; his son Steve Bennett and his daughters, Darla Bennett, Beckie Bennett and Shan Chute. 7 Grandchildren, Tom Dundas, Chad Marcellay, Laura Marcellay, Eric Freels, Joel Bennett, Tyler Marcellay and Will Bennett. 12 great grandchildren, Julian Reyes, Cyrus Smith, Cid Marcellay, Ethan Freels, Talia Freels, Larkin Freels, Hudson and Hadley Freels, Claire and Cate Bennett, Makenna Dundas, Cassius Marcellay and one great great granddaughter, Julysia Reyes. Born in Detroit, Michigan on September 20, 1923 of William D. and Ruth Bennett, he spent his early years on the farm in Michigan and traveled with his family to Palmer, Alaska when they were selected by the government to settle in the Matanuska valley in 1935. He was fond of telling stories about living and growing up in Palmer and was proud of the part that his family played in the history of Alaska. By the time they returned to Seattle in 1938 there were 6 children, Dick, Mary Jane, Bob, Jack, Patty, all now deceased, and his youngest brother Bill, now of Marysville, WA. After graduation from Bellevue High School and a summer spent working in the woods in Alaska he went to work at the shipyards in the Seattle area, but by 1942 he was partnered in an orchard lease outside of Brewster. After harvest that fall his partner ran off with all the money but Dick had the last laugh, he had already fallen for the farmer’s daughter, a relationship that would span seven decades. In December 1943 he enlisted in the Navy and was taught how to put on a rubber diving suit and a heavy bronze helmet and repair ships underwater. In October 1944 he came home on leave and he and Shirley were married in the Log Church in Brewster. Discharged from the Navy at the end of 1945 he returned to Brewster and built a modest house out of a couple of orchard cabins. By this time he had already developed the work habits that would make him a legend in this part of the county. In 1947 their first child was born and he was already making plans to open his hardware store which finally opened in February of 1949. Already an accomplished cabinet maker and a Navy trained metal smith he used the hardware business to learn new things, like appliance and TV repair, oil furnaces, refrigeration and plumbing. He even built his own orchard sprayer. He was the man that people turned to when they couldn’t find anyone else to solve their problems, and lack of ability to pay was not an insurmountable obstacle. All things must come to an end and so it was with the hardware business. But he had a new plan and in the early 70’s he said goodbye to hardware and started installing permanent orchard irrigation systems. It was about this time that he joined the Civil Air Patrol and became a pilot, something he enjoyed greatly. He finally retired in the late 80’s but never really stopped puttering around in his shop. Even then he went to the coffee shop every day to talk with his friends and solve the world’s problems. He even found time to go fishing once in a while. Dick was known to all for his honesty and gentleness. So thanks for being there Dick, Dad, Grandpa, whatever we called you, we’re going to miss you. Just having you around made the world run a little smoother and that’s not a bad thing to say about a man’s life, not a bad thing at all. Services will be at the Bridgeport Cemetery, 11 am Friday, August 22, 2014. Visitation at Barnes Chapel, Brewster, 5 to 8 pm Thursday, August 21st. Dinner following at The American Legion in Brewster.

The family of Richard "Dick" B.. Bennett created this Life Tributes page to make it easy to share your memories.