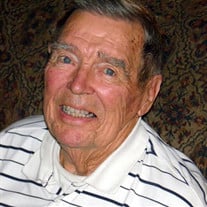 RICHARD “DICK” COCHRAN passed away Sunday, January 21, 2018 surrounded by his loving family. Dick was born May 11, 1927 in Hover, Washington to J. Robert and Edna Cochran. Dick graduated from Chewelah High School in 1944, attended Washington State College for one year before enlisting in the US Navy. After serving in the Navy, he taught one year in a one room schoolhouse in Canfield, Idaho where he got his passion for teaching. He went back to Washington State College to finish his teaching degree. It was there that he met the love of his life Shirley Martin while working for her parents in Martin's Greenhouse. They were married in Pullman, Washington in 1952 and enjoyed 65 years together. He started teaching Ag Education and Washington History at Manson High School in 1956. He was class advisor for many of the graduating classes. He also enjoyed coaching wrestling. He taught until 1966 when he became a rural mail carrier for Manson and he and Shirley also opened Cochran's Flowers. They sold Cochran's Flowers in 1977 and he retired from the post office in 1989. He continued to substitute teach at Manson into his 80s. Dick enjoyed gardening and was one of the founding members of the Manson Farmer's Market. He and Shirley started the first 4-H club in Manson and spent 35 years as club leaders. Dick was active in the Chelan Valley Fair. He also spent 36 years on the Chelan County Fair Board – one year as President of the Washington State Fair Board. He was also active in the Manson Kiwanis, First United Methodist Church, and was on the board for Manson schools and Manson Growers. He had a passion for kids and saw the value of education. Dick was active in scholarship committees and always worked to help kids succeed. Some special recognitions he received were Manson Citizen of the Year, Kiwanian of the Year and he and Shirley were Grand Marshalls of the Manson Apple Blossom Parade. He is survived by his wife of 65 years Shirley, sisters Pat Nelson, Nancy Edwards, Eleanor LaRose and brother Thomas Meier, son Robert (Camille) Cochran, daughter Rozy (Ron) Williams; son Marty (Lorrie) Cochran; grandkids Eric, Nick, Austin, Blake and Cole Cochran, Wendy Tukey, Travis and Madison Williams, along with 6 great grandkids. He was preceded in death by his mom and dad and brother Delbert. A celebration of Dick's life will be held at Manson First United Methodist Church, Saturday, January 27, 2018 at 11:00 am. Donations on behalf of Dick may be made to Manson Kiwanis Scholarship Fund or Manson First United Methodist Church. Kunz Floral of Wenatchee will be in charge of flowers. Precht Rose Chapel is in charge of funeral arrangements.

The family of Richard Alan Cochran created this Life Tributes page to make it easy to share your memories.