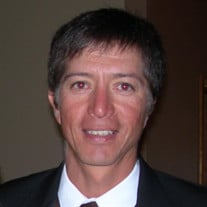 Reynaldo &#8220;Rey&#8221; Guerra of Manson passed away on Wednesday, March 4th, 2015 at the Chelan Hospital in Chelan, Washington at the age of 41. He spent the last day of his life with family and friends at his bedside and he took his last... View Obituary & Service Information

The family of Reynaldo Escalera Guerra created this Life Tributes page to make it easy to share your memories.

Reynaldo “Rey” Guerra of Manson passed away on Wednesday, March...