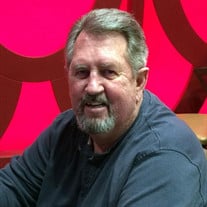 Randy (Randal) Lee Williams passed away on January 26, 2021, due to an infection while battling cancer. He was born in Modesto, CA, on February 19, 1947, to Bill and Mildred Williams of Wenatchee, WA. Randy spent a majority of his childhood growing up in the San Joaquin Valley and then later migrated the coast following harvests with his family until they permanently settled in Pateros. Randy graduated from Pateros High School, in 1965. Randy enjoyed athletics: playing football, baseball, and basketball, and was active in several clubs. While in school, he met his wife to be, Lynda Williams and they were married for 53 years. Upon graduating Randy was drafted into the army and spent the next two years in Texas and Korea. Upon returning stateside, Randy and Lynda began their family and purchased both a home and orchard on the Bridgeport Bar. The next 20 years he dedicated to farming and family. He stayed very active between volunteer coaching, school board, and following family sporting events all over the state. Once his children were grown he veered from his hands-on farming and took a plant management position at Nickell Warehouse. He then spent the next 20 years managing production lines for several local warehouses. Randy retired from the industry in 2010 and took great enjoyment using this freedom to now follow his grandkids school and sports events. Randy was a lifelong learner and teacher of all the knowledge he could absorb, he loved spending time with his children, grandchildren, and great-grandchildren. He enjoyed working in his garden, painting/drawing, fishing, motorcycles, sports, coaching, and camping. Randy was preceded in death by his wife and his parents. He is survived by his daughter, Melissa Medina of Bridgeport, WA; son, Mark Williams of East Wenatchee, WA; four grandchildren: Danielle Medina, Alex Solorzano (Alexa Burch), Hunter Williams, and Deyd Williams; and two great-grandchildren, Elora Solorzano and Oliver Solorzano. He is also survived by his and brother: Gordon, and sisters: Linda and Kathy; and numerous nieces and nephews. He loved his family very much and will be missed tremendously by all. Please leave any thoughts and memories for the family at www.barneschapel.com. Services are entrusted to Barnes Chapel of Brewster.

Randy (Randal) Lee Williams passed away on January 26, 2021, due to an infection while battling cancer. He was born in Modesto, CA, on February 19, 1947, to Bill and Mildred Williams of Wenatchee, WA. Randy spent a majority of his childhood... View Obituary & Service Information

The family of Randall L Williams created this Life Tributes page to make it easy to share your memories.