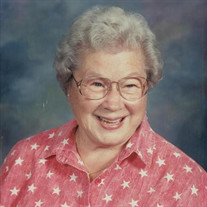 Bertha Lillian “Peg” Gordon went to be with her Lord and Savior Jesus Christ August 5, 2017 in Chelan at the age of 91. Peg was born on February 25, 1926 to Oliver R. and Bertha E. (Wagner) Fellows in Kooskia, Idaho. She was the third of 10 children. Her family moved to Chelan in 1934. It was during the depression and her father had the promise of a job in the area. Peg was named after her mom and her aunt. Her mother did not think the name Bertha suited such a pretty little girl, so Peg got her lifelong nickname when she was a baby. Peg asked Jesus Christ to be her Lord and Savior when she was a young girl. She was baptized in Lake Chelan at the age of 17. She faithfully followed Christ, through life’s ups and downs, for the rest of her life. Mostly they were ups! Peg graduated from Chelan High School in the class of 1944. Right out of high school, she went to work for the Interstate Telephone Company in Chelan. She was an old-fashioned switchboard operator, putting in long hours at the telephone exchange. Peg worked for Pacific Northwest Bell Telephone in Wenatchee from 1946-1948, then transferred back to Chelan when Interstate Telephone became General Telephone. Peg married Kenneth Woodrow “Doc” Gordon in 1949. They made their home in Chelan. Doc and Peg became the parents of two boys, John and Dick. Outside of employment, the family hunted, fished, and loved to camp. Peg especially enjoyed visiting her only sister, Esther Courtney, in Stehekin. Peg had an artist’s eye for the beauty of the outdoors. Mountain scenes of lofty snow coverd peaks and a cabin nestled near a flowing creek were some of her favorite subjects to sketch and paint. In 1958, Peg was promoted to the Chief Operator position and did that until 1974. With her strong work ethic and caring ways, she excelled at managing the Chelan office and many of the operators she hired became lifelong friends. When General Telephone closed its Chelan office, Peg transferred to Coeur d’Alene, Idaho and worked there for several years in management as a traffic supervisor. Peg and Doc moved back to Chelan for good in 1979. Peg retired from General Telephone in 1981, after 35 years with the company. Doc and Peg enjoyed their retirement years together until his death in 1984. Through the years Peg stayed busy in the community. She was a den mother in the cub scouts, active in the PTA, and held various leadership roles in the Soroptimist Club. After retirement she became a member of the Telephone Pioneers, continuing friendships she made during her long career with GT&E. She also worked many busy holiday weekends as a reserve police officer with the Chelan Police Department. Peg will be sorely missed. She enjoyed people, and hospitality was a gift she excelled in. Her house hosted many meals and was a place to stay for traveling friends and family. She offered an open door and heart, a quick smile and much laughter, a fresh pot of coffee, and lively conversation interspersed with the clicking of knitting needles. She fashioned sweaters, hats, socks, mittens, all handed out to friends and family. If her hands weren’t busy, she wasn’t happy. In later years, she acquired several spinning wheels and learned the art of yarn making through workshops and classes. Peg is survived by her sons John (Beth) and George “Dick” (Taina) of Chelan, plus seven grandchildren (Evelynne, Clayton, Kenneth, Abigail, Jim, Mikko, and Will) and four great-grandchildren. Peg is also survived by her brothers Donald, Gorden, Ernest, and Alvin. She was preceded in death by her husband Doc, her infant sister Judith May Fellows, brothers Rawlin, Vernon, and Virgil, and her sister Esther. A memorial service will be held for Peg Gordon at 1:00 PM on August 19th at the North Shore Bible Church, 123 Wapato Point Parkway in Manson. Pastor Gordon Hyde will officiate. Funeral arrangements are being made by the Precht-Rose Chapel of Chelan. Please leave any thoughts and memories for the family at www.prechtrose.com. In lieu of flowers, please make donations in her name to the National Rifle Association. Online https://www.nrafoundation.org/donate or, by mailing a contribution to: The NRA foundation, 11250 Waples Mill Road, Fairfax, VA 22030.

The family of Peg Gordon created this Life Tributes page to make it easy to share your memories.

Bertha Lillian “Peg” Gordon went to be with her Lord and Savior...