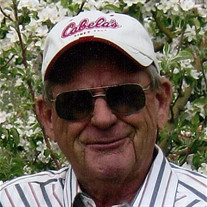 Norman Dean Fitzhugh, resident of Brewster, Washington passed away May 6, 2014 at Central Washington Hospital surrounded by his loving family. Norman was born to Doyce and Lula Belle Fitzhugh on October 16, 1940 in Brush Creek, Arkansas. Norm worked as a carpenter on construction jobs and worked on several of the dams here in Washington State. In 1970 he went to work for the Washington State Department of Transportation, where he worked for 28 years. He retired in 1998 as a Maintenance Superintendent in Goldendale, Washington. After retirement he and his wife Janice returned to Brewster. Norm was a wonderful husband, father, grandfather, friend, uncle, and brother. He touched so many hearts and lives. He loved spending time rebuilding old tractors, building trailers, and tinkering in his shop. He was especially crafty with his ability to build amazing rustic yard art. Norm is survived by his wife Janice Fitzhugh of Brewster, son Brad (Darleen) Fitzhugh of Coulee Dam, daughter Tammy Spicer of Spokane. He is also survived by grandchildren Josh and Heather Fitzhugh, Stephanie and Chad Morrison, Jessica and Will Bunting, Dacia and James Stevenson, and Taylor Spicer. Great-grandchildren are Samantha, Caden, Brycen, Justine, and Blake Fitzhugh, Cameron and Olivia Morrison, Brooklynn Bunting, Maci and Lexi Stevenson. He is also survived by sisters’ Glendal (Gary) Driessen, Marlene (Lynn) Wagg, and Janet (Gordon)Stavenjord, as well as, nieces, nephews, cousins and numerous friends. Norm was preceded in death by his father and mother, Doyce and Lula Belle Fitzhugh. Services for Norm Fitzhugh will be held Saturday, May 10, 2014 at 2:00 p.m. at Barnes Chapel in Brewster. There will also be a public viewing Friday, May 9, 2014 from 4:00 PM to 6:00 P.M. at Barnes Chapel.

The family of Norman Dean Fitzhugh created this Life Tributes page to make it easy to share your memories.