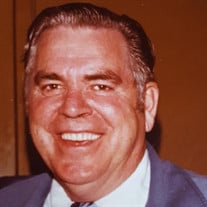 Neal Bruce Clark, 96, died peacefully in his sleep on the morning of July 14, 2017 at the Lake Chelan Community Hospital. At the time of his passing, Neal was surrounded by many of his children and close family friend Kathy Hart Neal was born April 30, 1921 in Edgemont, South Dakota and is preceded in death by his mother Helen and step-father Willis, his father; Harry, Neal’s loving wife; Mary, five brothers; Lewis, Harold, Russell, John, Monte, Wayne, a sister; Eleanor, a son; Larry and 3 great grandchildren; Rachael, David and Jack. After moving with his family to Omak, Washington Neal met the love of his life, Mary Coleman, in 1937 and after a three-year courtship they were married on July 7th, 1940. Initially, the young couple made their home in Omak, however through the course of their lives Neal and Mary would make future homes in Colville, East Wenatchee, Wenatchee, and lived as far south as Madres, Oregon and Santa Paula, California. The couple finally settled in the Chelan Valley in 1963. Neal was the proud father 8 children, Rose Miller of Clinton, Montana, Larry Clark ; deceased, Karen (K.D.) Shrader of Wenatchee, Vickie Gors of Manson, Tony Clark of Apache Junction, Arizona, Laurie Langston of Pahrump, Nevada, Jody Hughett of Chelan, and Aleta Quimby of Tenino. Additionally, Neal and Mary have been blessed with 119 total grand, great-grand and great-great- grand children. If Neal had a second love of his life it would have been as a member of the Fraternal Order of Eagles. Neal was a member of the Eagles for nearly 70 years, and even rose high enough in the organization to serve as the Washington State President for the 1976 – 1977 term. His hard work and dedication were recently recognized with an induction into the National Eagles Hall of Fame. Neal was a driving force in the growth of the organization and is at least partially responsible for the opening of many different Aeries in the state. Neal and Mary enjoyed traveling throughout the United States as active participants in the Grand Aerie Conventions. Even after retiring from the Eagles, Mary and Neal continued to explore the United States, going south for the winters to visit family and making many wonderful friends over the years. There will be a grave side service held for Neal on Saturday, July, 22nd, at 10:30am at the Riverview Fraternal Cemetery in Chelan and will be followed by a celebration of his life and dinner to be held at the Chelan Eagles later that afternoon. For those individuals who are shy or for those who may not be able to attend but would still like to share a fond memory or amusing story about Neal’s life, the family would like to encourage you to write your story down as Pastor Gregg Thorn ,who will be presiding over the ceremony, has volunteered to read your stories for you. The family would like to express their deepest gratitude and heartfelt thanks to the dedicated staff at the Lake Chelan Community Hospital for making Dad’s final days as peaceful and pain free as possible.

Neal Bruce Clark, 96, died peacefully in his sleep on the morning of July 14, 2017 at the Lake Chelan Community Hospital. At the time of his passing, Neal was surrounded by many of his children and close family friend Kathy Hart Neal was born... View Obituary & Service Information

The family of Neal Bruce Clark created this Life Tributes page to make it easy to share your memories.

Neal Bruce Clark, 96, died peacefully in his sleep on the morning...