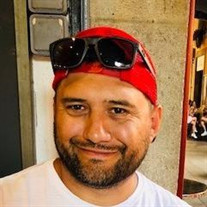 Natividad (Nate) Rubio Jr, formerly of Moses Lake, Washington, passed away unexpectedly January 11, 2020 in Spokane, Washington. Nate is survived by his parents, Natividad and Leticia Rubio; his wife Ketarae Konshuk; his daughter, Nayeli Rubio; his sisters Brenda Cruz (Hector Cruz), Anali Hernandez (Juan Hernandez); his brothers, Enrique Rubio (Alma Rubio), Omar Rubio, and Emmanuel Rubio. Nate has many nieces and nephews; Sofia Cruz, David Cruz, Daniel Rubio, Nicholas Rubio, Isaiah Cruz, and Grace Rubio. Nate is preceded in death by his grandparents, Eduarda and Jose Rubio. Nate was born October 19, 1983 in Omak, Washington. He was 36 years old. Nate graduated from Brewster High School in 2002. He earned his Ba in 2006 and MBA from Eastern Washington University in 2011. For the past seven years Nate has been the Human Resources Director for Washington Fruit & Produce. On July 13, 2019 he married the love of his life, Ketarae Konshuk in Wenatchee, Washington. Together Nate and Ketarae welcomed their beautiful baby daughter on August 2, 2018. He was a loving and devoted husband and father, who cherished his family. All services will be held in Nate’s hometown, Brewster, Washington. A viewing will be held Thursday, January 23, 2020 from 5:00 to 8:00 pm at Barnes Chapel. The following day, Friday, January 24, a Mass service will be held at 10:00 am at Sacred Heart Catholic Church, followed by Locust Grove Cemetery. Then Saturday, January 25 at noon there will be Celebration of Life at Brewster High School followed by a reception at Brewster Bear Basket from 2:00-6:00 pm.

The family of Natividad Rubio Jr. created this Life Tributes page to make it easy to share your memories.