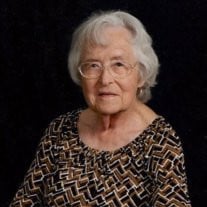 March 25, 1928 ~ October 17, 2013 Mary Ardis Harris of Manson, died October 17, 2013, in Chelan, WA. Ardis was born in Wenatchee on March 25, 1928 to Arden and Cleta (Meredith) Harris. Her grandfather, C.A. Harris pioneered in both Douglas and Chelan Counties, while Washington was still a territory. Her uncle, T.J. Cannon, was one of the first pastors in the Entiat Valley. Ardis was raised and attended schools in Ardenvoir and Entiat. In 1950, she graduated from Fort Wayne Bible College in Indiana, with a degree in Biblical literature. She later earned a degree in education from Whitworth College. Ardis taught special education in the Chelan School District for 26 years. She was also a regular and active member of several churches over her lifetime. Whether teaching Sunday School, or raising her lovely voice in song, her presence was felt at the Little Stone Church, at North Shore Bible Church and at Real Life Lake Chelan. Ardis devoted her life to others and especially to children. In addition to teaching in the public schools, she and her lifelong companion, Betty Mason, participated in the Childhood Evangelism Fellowship, traveling to be of service. In their home, Ardis and Betty raised Betty’s three nephews as their own. Children of her heart, these were her sons: Bud, Raymond and David Walters. Raymond preceded her in death in 2008. If you had the opportunity to know Ardis, then you know what a kind and amazing woman she was. Although small in stature, she was giant in compassion and kindness. She’s touched thousands of lives and will continue to do so through her legacy she’s left, in those of us still here. Survivors include, Bud (Jan) Walters, David (Trista) Walters; her sister, Kathleen (Gary) Weiber; four grandchildren: Mary, John, Davia and Mason; and her numerous nieces and nephews. Her parents and brothers, Meredith, Merlin and Bob, preceded her in death. We will miss her dearly, but have no doubt that we’ll see her again someday. Services will be held Saturday, October 26, 2013 at 2:30 p.m. at North Shore Bible Church in Manson. As a memorial, please consider initiating or renewing a relationship with Jesus. Ardis found such joy in her faith. Please feel free to leave the family your condolences through our website at www.prechtrose.com.

The family of Mary Ardis Harris created this Life Tributes page to make it easy to share your memories.