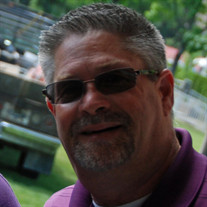 Today we mourn the passing of our beloved husband, father, son, brother, uncle & trusted friend. On December 8, 1960, Marty Delee Evans was born to James William and Rosalee Fern (Hale) Evans in Vici, OK. He passed from this life Saturday, June 13, 2015 at the age of 54 years, 5 months and 13 days at his home near Brewster, WA. Following his birth the family returned to their home in Wichita, KS until he was the age of 3. At that time, they moved to Snohomish, WA, where he started his education through 1st grade. 2nd through 5th grades were attended at Sulphur Springs school in Pine Bluff, AR. He then attended Watson Chapel Academy for the next 5 years where he played basketball, football, and baseball. During his junior year of high school the family relocated to Vici, OK, where he finished his education in 1979 and was active in basketball , baseball, football, band and show choir. During this time, Marty also enjoyed spending time with his friends and being one of the original members of the “Gospel Lights” band. Marty spent the summer after graduation working in wheat harvest with the Ladd family. He then went to work for his dad, in the family Business, Evans & Sons and also worked for Bro. Cecil Randall doing cement work. In 1981 he went to work for the Terra Plant in Woodward,OK, where Bro. Gene Turner was a great example and light to him. After quitting this job to care for his ailing grandfather, Bro. Leo Hale, Marty returned to work for the family business. On January 9, 1980, Marty began his walk with the Lord by being baptized into The General Assembly and Church of the Firstborn by Bro. Eddie Tomlinson. He was a faithful servant that brought many friends to the faith. Marty strove to live his life for the Lord and help others to do the same. In his role as minister, he often said, “If you are gonna carry the book to the front, then you better be ready to marry, bury, and baptize.” This was a statement he truly lived by as he was called to all three many times in his life. Marty traveled many miles working for the Lord and held many meetings, attended many campouts, and enjoyed fellowship with the brethren. During Marty’s senior year, he starting dating Kim Clark, the love of his life, and continued to date for the next 6 years, getting engaged on February 14, 1984. They then married on July 13, 1984 and made their home in Vici, Ok. To this union a baby girl was born, Bethany LaNae, but the Lord called her home on November 9, 1987. Soon after the death of their baby, the Lord allowed Marty and Kim to welcome in their home their nephew who helped fill a void for the next year. Marty and Kim soon relocated to Norman in 1989 where Marty worked in the HVAC field. The Lord soon had other plans for them and led them to Brewster, WA in 1993, working up to this day for his brother-in-law’s business, Cascade Heating and Air/Cascade as an HVAC Sales Manager. Three years later, Marty and Kim was blessed with a son on May 4 1996, Lance Alan, who was their miracle baby and brought them great joy. Marty loved hunting with his wife and son. He enjoyed watching sporting events with family and friends. He was proud of his son’s desire to follow in his footsteps and took great joy in the idea that Lance would someday carry on the legacy of HVAC. For the last twenty-one years Marty has been an active member of the community. He was active in many sporting events and school functions such as Brewster Little League Coach, 4-H supporter, Babe Ruth baseball Coach, Pateros Pride President, Public Announcer for the Pateros High School Football team with his great friend John Gelstin, and Assistant Baseball Coach for Pateros High School. Marty was preceded in death by his father, JW Evans, father, John Freeman, daughter, Bethany, Mother in law, Christine Clark, sister in law, Kelly Clark, niece Ashley Swezey, and nephew, Zach Swezey. He is survived by his loving wife, Kim and son, Lance of Brewster, WA, mother, Rosalee Freeman of Vici, OK, ; brother James and wife Lisa of Vici, Ok, sister JaLea and husband Greg Swezey of Carlton, WA, brother, Rusty and wife Mary of Banks, OR; sister in laws Karren and husband Mark Kemerley of Mustang, OK and Tracey and husband Jason Zwink of Woodward, OK; 12 nephews, 7 nieces, 1 great nephew, 3 great nieces, many cousins, and host of brethren and friends. Marty was a special man and will be deeply missed. Services for Marty Evans will be Friday, June 19, 2015 at 10 AM at the Brewster Church of the Firstborn. There will be a reception to immediately follow at the church. There will be graveside interment services for Marty at Sunnyside Cemetery in Vici, Oklahoma on Tuesday, June 23, 2015 at 10:00 AM. Please feel free to leave any thoughts and memories of Marty for the family at www.barneschapel.com. Services are under the direction of Barnes Chapel of Brewster and Shaw Funeral Home of Vici, Oklahoma.

The family of Marty Delee Evans created this Life Tributes page to make it easy to share your memories.

Today we mourn the passing of our beloved husband, father, son,...