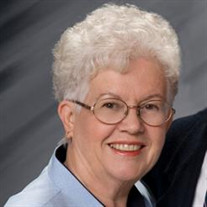 Marsha Ann James, 75, passed away July 31, 2015 in Chelan, Washington, surrounded by love and family. Marsha was born June 2, 1940, in Snyder, Texas, upstairs in the fire hall where her father was a fireman. She was the second of three daughters born to Richard and Johnnie Ruth Davis. The family moved to San Antonio and eventually to Lubbock, Texas. While attending Monterey High School in Lubbock, Marsha met the love of her life, Charles “Chuck” James. She was 15 years old. In 1958 at age 17, she graduated from high school, married Chuck, and then left on her honeymoon, all within 24 hours. Chuck and Marsha honeymooned on their drive from Texas to Seattle, Washington, where jobs and college were waiting. They started their family in 1960, with Debbie, followed by Laura, Susan, Mike, and Linda, five children in six years! During this time, Chuck finished medical school at the University of Washington, then entered the Army. The family moved several times in the next few years with Army postings in Texas, New Jersey, and Utah. After military service ended, the family settled in Chelan in 1970, where Chuck began work at the Lake Chelan Clinic in family practice. Marsha was a loving, generous, and energetic person, dedicated to raising her children and helping her community. She was a member of the Lake Chelan Hospital Guild X, and took an active role in her church, St. Francis de Sales. During her 45 years at the church, Marsha taught catechism classes to elementary and eventually high school students. She and Chuck helped establish the church choir, bringing music and joy to the liturgy for 38 years. A love of music was passed down to their children and grandchildren. Marsha and Chuck also instilled a passion for serving others, with four of their children becoming educators, and one in nursing. When her youngest child went off to college, Marsha obtained her realtor’s license and worked for a time at Lake Chelan Properties. She then worked at Allison’s Interior Design, and eventually as a medical assistant with her husband at the Lake Chelan clinic. During this time, Marsha and Chuck’s family continued to grow, with the addition of 9 grandchildren. In their retirement, Marsha and Chuck enjoyed traveling, including winter visits to Maui and golf in Palm Springs. Some of their favorite times were the frequent boat trips up Lake Chelan. Family remained the center of their lives, with several James’ Gang reunions and a special 50th Anniversary celebration in 2008. Marsha is survived by her husband of 57 years, Chuck James; her sister Nancy Flower of Powhatan, Virginia; her children Debbie Allen of Spokane, Laura Davis (Jeff) of Mt. Vernon, Susan James of Mercer Island, Mike (Marci) James of Chelan, Linda (Kevin) Nelson of Woodinville, as well as 5 grandsons, and 4 granddaughters. She was preceded in death by her parents and her sister Kathy Thornton. A funeral mass will be conducted at St. Francis de Sales in Chelan at 1pm on Friday, August 7, followed by a reception in the Church hall. In lieu of flowers, please consider making a donation to the Alzheimer’s Association or the charity of your choice.

Marsha Ann James, 75, passed away July 31, 2015 in Chelan, Washington, surrounded by love and family. Marsha was born June 2, 1940, in Snyder, Texas, upstairs in the fire hall where her father was a fireman. She was the second of three daughters... View Obituary & Service Information

The family of Marsha Ann James created this Life Tributes page to make it easy to share your memories.