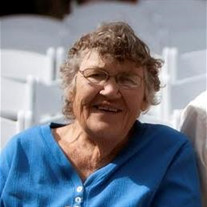 Margaret Ann Socci, a lifetime resident of Bridgeport, WA, passed into the loving arms of her Savior on September 20, 2016. Margaret Ann was born on January 27, 1937 to Emerson and Lois Hanford as a pure and genuine farm girl perfectly proportioned with elegance and poise. Margaret was a 12 year Senior of the class of 1955 at Bridgeport High School. In 1954, Margaret’s brother Doug introduced her to fellow airman and the love of her life, Jim Socci. The two were married in Bridgeport, WA on August 27, 1955. While Jim was serving his final years in the U.S. Air Force at Moses Lake, WA they were blessed with daughter Elizabeth. After her short time as an Air Force wife, they moved to and lived briefly in Norwood, MA, blessed again with son Ralph. Margaret and Jim moved back to Washington in 1959, where they were blessed again with two more sons, Jim and David. Better known to her friends and family as Margie Ann, Margaret gave selflessly, never realizing how much she gave or how many lives she touched and influenced with her kindness and wisdom. She loved the Lord, her family, friends and God’s majesty that surrounded her, especially garden flowers and the bird kingdom. Margie Ann was considered by all who knew her, a master gardener, chef and expert bird watcher. She loved to sow then reap the garden bounty storing up for all to share. She loved cooking meals for the smallest occasion to the grandest, too her they were all special. She figured it easiest to cook for a hundred as you never knew who may have perfectly timed their visit for some important matter. She loved to watch, catalog and simply enjoy the bird kingdom in every State she was fortunate to visit. She was truly a Wife and Mother of the highest Noble Character. Margaret was preceded in death by her parents; Brothers Doug and Harry (Lee) Hanford; and daughter Elizabeth Ann Bisque. She is survived by Jim, her husband of 61 years at home; sons Ralph of Bridgeport, WA; Jim, wife Joanne of Spokane, WA; David, wife Shelly of Renton, WA; grandchildren Lynette Jones, Joel Socci, Derek Socci, Angela Socci, Ashley Socci, David J. Socci and Rachael Bisque; nine great-grandchildren; and several nieces and nephews and their spouses. Visitation will be held at Barnes Chapel (510 W. Indian Ave., Brewster, WA) on Friday, September 30, 2016 from 10 A.M. to 11 A.M. Services will commence at the same location at 11 A.M. Interment to follow at Bridgeport City Cemetery (15th and Fisk, Bridgeport, WA), followed by a meal provided by the Eagles Lodge (1030 Columbia Blvd, Bridgeport, WA). In lieu of flowers, the family suggests donations be made to organizations supporting cancer research and heart healthcare. Leave any thoughts and memories for the family at www.barneschapel.com. Services are under the direction of Barnes Chapel of Brewster.

Margaret Ann Socci, a lifetime resident of Bridgeport, WA, passed into the loving arms of her Savior on September 20, 2016. Margaret Ann was born on January 27, 1937 to Emerson and Lois Hanford as a pure and genuine farm girl perfectly proportioned... View Obituary & Service Information

The family of Margaret Socci created this Life Tributes page to make it easy to share your memories.