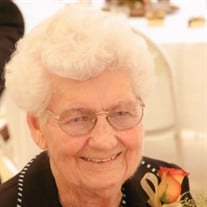 Margaret G. Kamphaus, 101, of Chelan, WA, passed away peacefully on April 25, 2020. Margaret was born on November 12, 1918, on a Chelan Butte homestead, to Walter J. and Georgia M. Petersen. She was the eldest of five children. Margaret loved living on the homestead where she attended the South Butte School until it closed in the summer of 1931. At the age of 13, Margaret and her family left the homestead and moved to town so she and her siblings could continue their education. As a teenager, Margaret enjoyed rollerskating and going to shows but her favorite activity was dancing. She always said dancing was a grand time! Margaret graduated from Chelan High School in 1937. Margaret married the love of her life, Russell G. Kamphaus on June 26, 1938. Margaret and Russell lived in Chelan and various locations until 1946 when they purchased their first orchard in Manson, WA. Manson became home while they raised their four children. Margaret was a strong woman with an incredible work ethic. Margaret worked with Russell in the orchards and for several years also had a seasonal job at Trout packing apples. Late at night, after all the other work was complete, you would find Margaret doing the bookkeeping for their orchards. She said positivity and hard work were a couple of her secrets to longevity. In 1976, Margaret and Russell returned to Chelan to embark on another orchard venture located along the Columbia River. This venture was a ton of work but together they made it into a beautiful and peaceful place where many memories were made. Margaret turned sand and sagebrush into gorgeous flower gardens. Margaret enjoyed many things in life such as camping, fishing the streams, tending to her beautiful flower gardens, reading, working crossword puzzles, and traveling to National Parks and to other parts of the country. However, nothing was more important to Margaret than her family. The love she had for her family was endless. Her love also extended to the family dogs. Margaret loved having family gatherings for holidays, special occasions, or just because it was Sunday. She made every occasion special, even the family orchard work parties were fun. She especially loved spending time with her grandchildren and great-grandchildren. Memories were made that will remain in our hearts forever. Margaret was also involved in the community. She volunteered at the local food bank for several years. Margaret was also a long time member of St. Andrew’s Episcopal Church. She enjoyed being a Sunday School teacher and a member of the Episcopal Church Women (ECW). Margaret was also a member of the Eagles Auxiliary and Daughters of Rebekah. Margaret was a woman of love, strength, compassion, loyalty, and faith. She made the world a better place and will be missed dearly. Margaret was preceded in death by her husband, Russell; her parents, Walter J. and Georgia M. Petersen; her four siblings, Darrell, Zelma, Zelpha, and Gerald. Margaret is survived by her children, Joan Hazelton (Larry) of Chelan; Nyla Kamphaus of Chelan; Jane Farris (Randy) of Chelan; Edward Kamphaus (Marilyn) of Entiat. She is also survived by several grandchildren, great-grandchildren, nieces and nephews. The family would like to extend a special thank you to Hospice for their wonderful and compassionate care. In lieu of flowers, please make memorial contributions to St. Andrew’s Episcopal Church, P.O. Box 1226, Chelan, WA or to the Wenatchee Valley Humane Society, 1474 S. Wenatchee, WA, 98801. A celebration of this magnificent woman will be announced at a later date.

Margaret G. Kamphaus, 101, of Chelan, WA, passed away peacefully on April 25, 2020. Margaret was born on November 12, 1918, on a Chelan Butte homestead, to Walter J. and Georgia M. Petersen. She was the eldest of five children. Margaret loved... View Obituary & Service Information

The family of Margaret Georgia Kamphaus created this Life Tributes page to make it easy to share your memories.