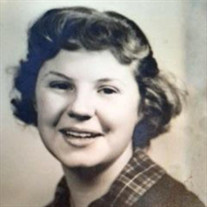 Margaret Jean Crane died peacefully on March 28, 2022, at home with her daughters: Mary “Biz”, Trudy, and beloved caregiver, Maria Theresa at her side. She was born on July 31, 1920, in Tacoma, WA, to Gregor and Irma McKinnon, an only child. She grew up as the much doted on child, in a household of her parents and unmarried Aunts: Bess and Jen, in Sumner, WA. Her Aunt Bess was a librarian and MJ became and remained a prodigious reader. Her father worked the night shift at the Fleischmann’s Yeast factory. During the day, she worked alongside her parents in their plant nursery, developing a work ethic and physical strength that carried her almost to her 102nd birthday. MJ graduated from Sumner High School at age 15 and went on to Pacific Lutheran College at age 16. In her early 20’s, she was hired as the bookkeeper for Art Norman’s Furniture Store in Tacoma, and became best friends with Art’s sister-in-law, Pat Crane. This is how she came to meet her future husband, Francis. Francis and Margaret Jean were married in Sumner on February 7, 1944. MJ and Francis came back to Brewster not long after marrying, to take over the family business. They incorporated Crane & Crane, Inc. in 1973. MJ worked as a bookkeeper for the business, and they had five children: Margaret “Trudy”, Peter, Jonathan, Barclay and Mary “Biz”. MJ seemed to have limitless energy, as a parent and business partner, with a multitude of child related activities including: Camp Fire Girls and Boy Scouts. She was known for staying up all night canning fruits and vegetables, reupholstering furniture, or sewing her daughter’s new clothing, only to continue on to a full day of work without complaint. Her daughter, Trudy, had a disabling car accident in 1973. MJ and Francis took on the raising of their grandchildren: Karin and Katherine, in addition to Trudy’s long rehabilitation. Her son, Jonathan, died in 1982, after a difficult battle with cancer. Margaret Jean went door to door soliciting donations for cancer research in hope to prevent such a tragedy for others. She was very active in St. James Episcopal Church in Brewster, until the closure and sale by the diocese. She worked as a volunteer for Douglas County with voter registration and in person voting. She and Francis traveled extensively, including to China after it opened to the public, in 1972. They were accompanied by their good friends on some of these trips. Margaret Jean loved her garden and gardening. She kept flower beds on the Crane property for many years. More than anything, MJ loved her Great Danes: Missy, Bessie, and Duchess. The family would like to say a special thank you to all of Margaret’s friends and caregivers, including: Maria Soria, Maria Rivera, Gabina, John, Cindy Kennel, Cindy Schmidt, Robyn, Lynn, Yani and Frontier Hospice. They would also like to thank members of the local community who brought Margaret Jean joy during her later years. Margaret Jean is survived by children: Margaret Roose “Trudy”, Peter, Barclay, and Mary “Biz” Crane; grandchildren: Katherine Harris and Karin Brammer (Trudy), Rachel Sullivan, Kaylan Farrow (Peter), Elizabeth McDaniel, Jennifer, Daniel (Barclay), Hana, Saba, and Kirubel Zewdie (Mary); great-grandchildren: Aria and Diego (Katherine), Margie (Karin), Gregor, Ruth, Sloan, Margo (Rachel), Eleanor (Elizabeth) and Whitman (Jennifer). Margaret Jean dearly loved all her children, grandchildren, and great-grandchildren. Memorial service will be held at the Stone Church in Brewster (formerly St. James), 515 W. Indian Ave., Brewster, WA, on May 14, 2022, at 11:00 a.m. A light lunch reception will follow the memorial at The River House, 912 South Bridge St., Brewster, WA. Donations can be made to the Jonathan Crane Memorial Scholarship Fund at the Washington Apple Education Foundation (WAEF), 2900 Euclid Ave., Wenatchee, WA. Please place your thoughts and memories at www.barneschapel.com. Services have been entrusted to Barnes Chapel of Brewster, WA.

The family of Margaret J Crane created this Life Tributes page to make it easy to share your memories.