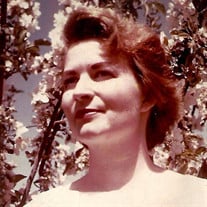 Lola Marie Zahn was born April 4, 1931 at the family home on Weston Mountain, Oregon, near Pendleton, the fifth of six children born to parents John and Inez Garner. Her favorite memories of that time were of adventures with her siblings and her dog that could always lead her home from anywhere on "the mountain". Times were hard growing up during the Great Depression and at the age of eight she was given over to a woman who ran a boarding house to wash dishes to earn her keep. The concern for having a food supply never left her and having learned hard work from an early age she would can, dry, freeze, and put away stores of food until her pantry was overflowing ever after. She enthused over memory of one of her first jobs as a car hop at an A&W drive-in. She later worked as the head bookkeeper for Carnation in Spokane where she met and married the love of her life, Bruce Zahn and together they ran Bruce Zahn Orchards Inc. for the next 57 years. They were very successful at everything they put their hands to. Lola began skiing at the Loup Loup Ski Bowl with him when the only lift was a rope tow. She became a National Ski Patrol, taught skiing and first-aid lessons and is likely most fondly remembered for her often requested chocolate sheet cake and by those she taught how to ski. Her civic dedication was remarkable by any standards; she was a qualified EMT and volunteered on the local Bridgeport Fire and Ambulance service for numerous years [even occasionally bringing her famous chocolate cake to meetings]. She was recognized by the Douglas County Elections Board for her 42 years of service overseeing the voting in Bridgeport. Her friends will recall a remarkably excellent Bridge player who hosted and played all up and down the valley from Bridgeport to Twisp. She was a member of the Garden Club and predictably,The Red Hats Club. Lola and Bruce shared many adventures in life, camping, travels to the beaches of Hawaii, Tahiti, and The Grenadines, honeymooning in Mexico, skiing in Canada, business trips to Japan, China, and vacations in Australia and New Zealand, always enjoying the local cuisine, culture and peoples they met, preferring to be led by a local to local cuisine and celebrations over the typical tourist attractions. Her primary interest was her devotion to family. She dedicated her life to making the lives of everyone around her better in every way. Lola and Bruce always freely gave of their love and attention, their advice and their financial support without reserve or restraint to all family members in order to advance their education, their living situations, their health and their happiness with never a concern for the cost to their selves. The matriarch of the clan Zahn, Lola, is survived by her son, Brian, his S/O Stacy Roberts, Son Tracy and his wife Terri. Grandson Brison, granddaughters Jessica and her husband Dusty Jones, Melanie and her husband Mike Johanns, Lolly and her husband Jerry Brown, Darby and her husband Greg Jones, great granddaughters; Katie and her husband Kyle Sarvela, Kylie and her soon to be husband Chris Stein, Jill Jones, Bridget and Kate Jones, and Presley Avenell, great-grandsons Xavier Zahn and Eric Im, a great-great granddaughter Bellamy Sarvela, and a great-great grandson Dustin Stein. And a special fuzzy loyal companion, Queen Jo. Lola's family takes comfort believing such a life of clear demonstration of Christian values warrants her name recorded in the Book of Life forevermore. A service led by Pastor Sam Buckingham is planned Thursday May 11, at 11am at Beaver Creek Cemetery, Twisp.

Lola Marie Zahn was born April 4, 1931 at the family home on Weston Mountain, Oregon, near Pendleton, the fifth of six children born to parents John and Inez Garner. Her favorite memories of that time were of adventures with her siblings and... View Obituary & Service Information

The family of Lola Zahn created this Life Tributes page to make it easy to share your memories.