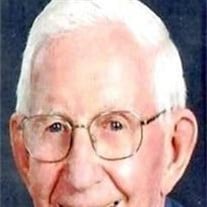 Obituary for Lawrence (Larry) Guy Gallagher, 96 Lawrence (Larry) Charles Gallagher, 96, passed on to be with the Lord on January 25, 2013 with family by his side in Chelan, WA. A memorial service will be held at North Shore Bible Church in Manson at 10:00 a.m. on Wednesday. A viewing will also be held between 9:00 and 10:00 a.m. preceding the memorial. He was born on January 27, 1916, in Springdale, Washington. His family moved to Chelan in 1918 and Larry spent the remainder of his 96 years in the Chelan/Manson area. Larry grew up on his father’s ranch on the Chelan Butte. He loved to spend time riding horses and exploring the countryside around Lake Chelan when he was young. When he was older he continued to explore the countryside with his family on motorcycles. Over the course of his life, Larry held many jobs throughout the valley but he was best known as an orchardist. When he was 55 he married the love of his life, Wanda. Larry came to know the Lord and he was an active member of the North Shore Bible Church in Manson. He was instrumental in building the Church on its current sight and he was a Church elder for many years. He was also a member of the Manson Grange and the Manson Volunteer Fire Department. His interests included family, gardening, carpentry, horses, motorcycling, and camping. He also enjoyed caring for others in the community that needed help. His sense of humor and his smile were well known. Larry Gallagher is survived by his wife Wanda Gallagher; 2 sons and their spouses, Gordon and Jane Gallagher, Jim Scribner and Coni Ryan; 2 daughters and their spouses, Joyce and Jackie Williams, Janice and Mark Shorter; 7 grandchildren; 8 great-grandchildren; and 5 great-great- grandchildren. In lieu of flowers, donations may be sent to the Apple Valley Chapter of the American Red Cross. There will be a viewing at North Shore Bible Church, Tuesday January 29th, 2013 from 2-5pm. Services have been entrusted to Precht Rose Chapel, Chelan. Please feel free to leave comments and share stories for others to see.

The family of Larry Gallagher created this Life Tributes page to make it easy to share your memories.