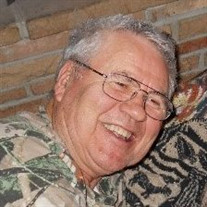 Keith B. Duke was born in Okanogan, Washington on January 2nd, 1936, passed away at his home on August 26, 2014 at the age of 78 with his loving family by his side after a courageous two year battle with leukemia (AML). His parents were Clarice L. and James M. Duke of Okanogan. Keith graduated from Okanogan High School in 1955 and dated Myrna L. Moore from their rival Omak High School during his senior year. He worked at Columbia Concrete in Okanogan until he was drafted in the US Army for the Korean War in 1958, the same year he married his long time love of his life, Myrna, on April 26 before shipping off to boot camp in Fort Ord, California. With the luck of a buddy urging him to volunteer for an unknown duty toward the end of boot camp, he and the buddy were sent to the Presidio base in San Francisco, CA, and spent their service years as military officer staff drivers until they were discharged from the armed forces. Myrna was then able to join Keith in Monterey and they spent two years living the “Big City” life which was very much the opposite of their rural upbringings in Okanogan County including later moving into San Francisco, closer to the Presidio base where they were blessed by their oldest daughter Tammy. After Keith discharged from the service they moved to Yakima, Washington where Keith secured a job for a wholesale grocer. At that time they had their second child and first son Dave. Keith, who always had a love of the outdoors, was able to get hired by the Washington Department of Fisheries at the Klickitat State Salmon Hatchery near the town of Glenwood, Washington. Their second daughter Connie was born at this time in Goldendale. Keith later transferred to the Chelan Fish Hatchery in 1967 to move North and closer to relatives in the area where he spent the early part of his life. He moved his ever increasing family to Chelan, their final destination, and their youngest son Sean was born. Keith’s passions in life were his family, hunting, fishing, his hunting dogs, telling stories with friends and family, and spending time up in the beautiful mountains of the Eastern Cascade slopes at Crawfish Lake where his father in law Jerry Moore, Sr., brother in law Jerry, Jr., and Keith built an A-frame on the North shore. Keith is survived by his wife Myrna, their daughter Tammy (Ken), son Dave (Michelle), daughter Connie, and son Sean (Shawndra). He is also survived by his grandkids Jamie, Matthew, Derek, Devin, Nick, Dillon, Hunter, Colton, Ryker and great grandkids Jeremy and Skylar. He is also survived by his younger brothers Stan and Ken Duke of Okanogan, Washington. He was preceded in death by his father James, his mother Clarice, and sister in law Barb Duke. Per Keith’s request, there will not be a formal memorial service and the family will have a small service at a later date at Crawfish Lake.

Keith B. Duke was born in Okanogan, Washington on January 2nd, 1936, passed away at his home on August 26, 2014 at the age of 78 with his loving family by his side after a courageous two year battle with leukemia (AML). His parents were Clarice... View Obituary & Service Information

The family of Keith B. Duke created this Life Tributes page to make it easy to share your memories.

Keith B. Duke was born in Okanogan, Washington on January 2nd,...