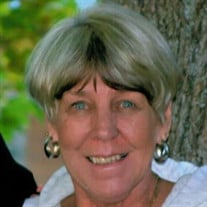 Kathleen “Casey” Anderson, 68, was suddenly and unexpectedly taken from us on June 28, 2015. She passed away surrounded by her family, and all of their love. She was born on April 4, 1947 to Gladys and Arthur Siebens in Portland, Oregon, where she and her big sister Pam were raised in the home their father built. She graduated from Madison High School in 1966. After high school, she attended beauty school, while working for a local veterinarian. Later she ventured north to Okanogan County where she met Jesse Hobart Jr. and they married in 1971. She and Jesse welcomed their daughter Desha in 1972 and son Jesse in 1974. They made their home in Riverside, Washington where she lived for 22 years. Casey and Jesse later divorced, and sadly he passed away a few years later. After his passing, she worked hard, sometimes working three jobs to provide for her children as they grew and made many sacrifices to ensure they were happy and healthy and loved – which they were in so many ways. She always put them first. She was the rock of the family. In 1989, she met her soulmate, Ronald Anderson. They were married on July 9, 2007. She and Ron made their home in Brewster, Washington. Casey worked for 20 years in the propane industry working at Ferrelgas in Omak, and later for Brewster Propane. She and Ron had many adventures traveling to car shows and auctions, or wherever their heart desired. They made many great friends and have many happy memories over their 26 years in love. Her fondest memory has always been the day she met him, and the 1963 ½ Ford Galaxy that brought them together. She had always said that was “their car”, and she loved to drive it. She loved Ron with all of her heart and was always proud to be his wife. Anyone who knew Casey, knew she was not one to mince words…she always said it like it was. She loved animals and especially her dog Wee-Zee, even though she referred to her as a little pain in the…….. She never knew a stranger and loved to be around people, and loved to talk! If you were lucky, you might get a nick name like “lil tamata” or “boobie”. She was an excellent cook and she loved to cook, especially for others. She’d always make enough for anyone who might show up for dinner. She was famous for her gravy. She had a spunky personality and a quick wit about her that was hard to beat. Casey might not have been very big, but her presence and her laughter would fill the room wherever she went. She was feisty and stubborn, but she was also an extremely kind and generous person and would always help others before she helped herself. She was a hard working little gal and always gave more than she had. She loved her grandson, Walter, and was always so proud of him and enjoyed every second she got to spend with him. She took pride in her home and cherished her friendships dearly. She truly loved her family with all she had, right to the end. Casey is survived by her husband, Ron; her daughter, Desha (Erik); her son, Jesse; and her sister Pamela (Jim) Hansen-Boyer. She also leaves behind her only grandchild, Walter – who was the sparkle in her eye. She was preceded in death by her father, Art; her mother, Gladys; her step-father, Raymond Ohme, and step-daughter Pamela Anderson. A celebration of her life will be held at a later date, to be announced. In lieu of flowers, we ask that you make a donation to the Brewster American Legion Post 97 in Casey’s memory. We thank everyone for their kind words and heartfelt sympathy as it means more than you will ever know. It is truly amazing to see just how many people’s lives she has touched. She will be missed so much. No services are planned at this time.

Kathleen &#8220;Casey&#8221; Anderson, 68, was suddenly and unexpectedly taken from us on June 28, 2015. She passed away surrounded by her family, and all of their love. She was born on April 4, 1947 to Gladys and Arthur Siebens in Portland,... View Obituary & Service Information

The family of Kathleen "Casey" Anderson created this Life Tributes page to make it easy to share your memories.