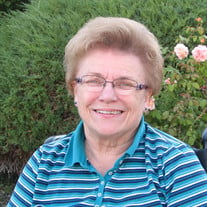 Karen Ann Webb (age 76) of Chelan went to be with her Lord and Savior Jesus Christ on October 10, 2019 at Colonial Vista in Wenatchee, Washington. She was a selfless loving woman with a warm, kind, and gentle spirit who truly loved people... View Obituary & Service Information

The family of Karen Ann Webb created this Life Tributes page to make it easy to share your memories.