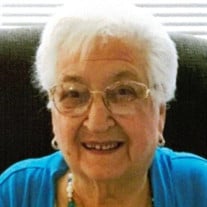 Our earth angel, faithful Mother, and best friend Joy Vanessa (Townend) Stanley departed this earthly realm on March 21, 2016. She walked through this life with dignity and kindness. Our beautiful, loving mother never uttered an unkind or slighting word towards her fellows. Always faithful, always gracious, she set an example by which all should conduct their affairs. She possessed impeccable character and an inner strength that could not be shaken in any circumstance. All those who knew her were truly blessed to be in her company. By her faith and selfless acts on this earth she is now home with her maker and loved ones who reside on the other side. Mum was born in Cardiff South Wales U.K. on April 20, 1925 to Frank and Gladys (Morgan) Townend. Her father a career Royal Airforce NCO and her mother a full-time postal worker were people of great substance and provided her with the foundation to become the earth angel that graced all of us with her presence. She and her family lived in London during the Blitz of World War II. She recounted many stories of the countless long and fear filled nights in the bomb shelters as the air war raged above them. As a young woman she witnessed the hardships of war. In witnessing these events, she chose compassion rather than resentment. Mum truly loved her fellow man and all of God’s creatures. Mum met our father in Penarth South Wales U.K. where she worked in a war plant and our father, Utah Stanley, was recovering from wounds incurred during the Italian campaign. After meeting, our Dad was sent back into action with the sixth armored division and D-Day operations. When he returned to the United Kingdom, Mum and Dad were wed in Penarth on August 18, 1945. Mum came to Brewster in 1946 to join our Dad. Our folks purchased a home in Pateros and raised our family. Mum worked packing and sorting apples at Methow Pateros growers for many years. In 1986, they retired to Ellensburg, where they resided until they moved to Manson in 1998. Each community in which she lived was blessed by her civic mindedness and faith. Even after her retirement she continued to work providing car services for the elderly. Joy was preceded in death by her mother and father, Gladys and Frank Townend, and her brother, David, of London England U.K. Her heart was broken at the passing of her husband, Utah Stanley, on September 4, 2004. She will be sorely missed by her daughter and earth angel, Pam Stanley, of Manson, Wash. Her eldest son, and man of gentle spirit, Frank Stanley and wife Barb of Ellensburg, and her youngest son, Steven (Cowboy) Stanley and wife Faun of Wenatchee and two grandchildren Trevor and Stacy Stanley. Graveside Services will be held Friday, March 25, 2016, 1 p.m. at Riverview Cemetery in Chelan. We will stand as one, as we promised you Mum. Frank, Pam and I will care for each other with love and compassion until our time’s come to be with you and Dad on the other side. We love you.

The family of Joy Vanessa Stanley created this Life Tributes page to make it easy to share your memories.