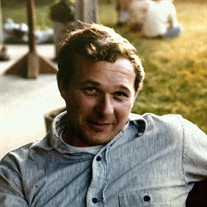 The family of John Clayton Gordon created this Life Tributes page to make it easy to share your memories.

“A good name is rather to be chosen than great riches, and loving...