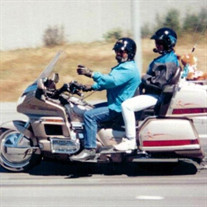 Johnny Ferreira went home to be with the Lord on July 14, 2015 at his home in Chelan WA. He was born July 16, 1944 in Acushnet, Massachusetts to Mary (Ferreira) Lima and John Ferreira. Johnny was raised by his Mom, Mary and Pappy, John Lima. Johnny grew up and went to school in New Bedford, Mass. with his brother Mike Ferreira and sisters Gerry Souza and Dot Foster. Johnny worked in a sweat shop pressing garment’s, then moved on to join the Army reserves from 1962 to 1970. During this time he also began driving truck and long hauling. Johnny & Elaine met in 1977 at Dirty Herbs Truck Stop in Counsel Bluff, Iowa. They married in 1978 and made a home in New Bedford. Johnny & Elaine drove truck together for many years. In the 80’s they made the move to Washington State, living in Granite Falls, Arlington then to Darrington. This is the place they loved the most; living beneath White Horse Mountain just outside of the small town, enjoying their horses, dogs and cats. They made many friends there, and enjoyed lots of overnight visits from family, friends and their nephews Jimmy, Joshua and niece Janea’, plus visits with Johnny’s parents and siblings from New Bedford. They lived briefly in Monroe then around 2001, they moved to Chelan WA to be closer to Elaine’s side of the family. Through out their moves, they were members of the Goldwing Touring Association, going on trips and camping. Johnny was a member of the Eagles and Moose where he and Elaine would go dancing and made many friends. Johnny continued to drive truck for Sims Trucking until April 2015 when his cancer needed their full attention. Johnny counted us all as family and good friends. He was always willing to lend a helping hand to those who needed it. He will be sorely missed. Johnny is preceded in death by his Pappy, John Lima & his half-sister Diane Padilla. Johnny is survived by his wife of 37 years, Elaine Ferreira; mother, Mary Lima; brother, Mike (Norma)Ferreira; sisters Gerry Souza and Dot Foster, half-sisters Carol Vincent, Mary (Ron) Holmes and Nancy Brown; parents-in-law Buzz & Sally Hunter, 11 sister & brother-in-laws, 13 nieces and 9 nephews, and several great nieces & nephews. Also their fur babies, Kiya, Katie and Buddy.

Johnny Ferreira went home to be with the Lord on July 14, 2015 at his home in Chelan WA. He was born July 16, 1944 in Acushnet, Massachusetts to Mary (Ferreira) Lima and John Ferreira. Johnny was raised by his Mom, Mary and Pappy, John... View Obituary & Service Information

The family of John Ferreira created this Life Tributes page to make it easy to share your memories.