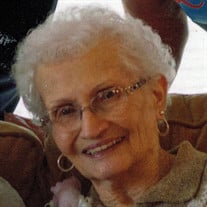 Jo Ellen (Jody) Mack, 90, passed away peacefully early Tuesday morning at Chelan Hospital. She was born December 21, 1927 to Clifford and Ignota Roberts in Warsaw Indiana. She graduated from Warsaw High School in 1946 and then attended Purdue University in W Lafayette, Indiana where she was a member of Kappa Alpha Theta sorority. While at Purdue she met Ronald Montgomery and they married October 14, 1949. They moved to Estes Park, Colorado where he worked for the Federal bureau of Reclamation as an engineer. They moved many times with his work. Daughter Sherry was born in boulder Co, son Kyle in in Aiken SC, and son Bill was born in Yuma Az. Ronald and Jody moved to Montrose, CO, where Ronald died in 1965. She met Leo (Jack) Mack and they were married in 1966. Cheryl, Mike and John were added to Jody’s children. They moved to Lake Chelan in 1967 where Jack worked for Douglas County and Jody worked for the post office. She retired in 1988. She was preceded in death by her brother Dick. She is survived by her husband Jack at the family home, Cheryl and Joel Jordan of Spokane, Sherry and Jim Broemmeling of Clarkston, Mike and Debbie Mack of Chelan, Kyle Montgomery of North Bend, John and Crista Mack of Chelan and Bill Montgomery of Wenatchee. She is survived by 13 grandchildren and 13 great grandchildren. Jody had a good heart and a warm spirit. She was quick to laugh, and loved her Mariners and Seahawks. She had a deep faith in Jesus and dances in the stars. She will be missed by all who loved her. Services for JoEllen Mack will be Monday, October 22, 2018 at Precht Rose Chapel, Chelan, followed by the inurnment at Fraternal Cemetery. She was a member in the Chelan United Methodist church and Eastern Star. In lieu of flowers please consider donating to the Wenatchee Humane Society, 1474 S. Wenatchee Avenue, Wenatchee, WA. 98801. Please leave any thoughts and memories for the family at www.prechtrose.com. Services are directed by Precht Rose Chapel of Chelan.

Jo Ellen (Jody) Mack, 90, passed away peacefully early Tuesday morning at Chelan Hospital. She was born December 21, 1927 to Clifford and Ignota Roberts in Warsaw Indiana. She graduated from Warsaw High School in 1946 and then attended Purdue... View Obituary & Service Information

The family of JoEllen Mack created this Life Tributes page to make it easy to share your memories.