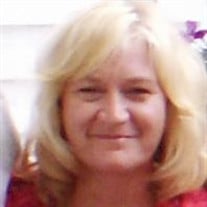 Joanna Lambert, beloved mother, grandmother, wife, daughter, sister and aunt, passed away peacefully in Wenatchee on March 14, 2018, as a result of a car accident in 2013. She was born in Brewster, WA. on March 10, 1966, the daughter of Troy and Marilyn Burnett. Joanna attended Pateros schools and finished as a 12 year graduate in 1984. She went to Wenatchee Valley College, worked at Three Rivers Hospital, Erlandsen & Associates, and ran her own daycare. Her last job was working for Gebbers Farms/The Apple House. Joanna married her longtime friend, Mike Lambert, on July 27, 1990. Together they had three children; Rachelle, Zachary and Jacob. Joanna was an avid athlete and was awarded Pateros Athlete of the Year in 1984. After high school, Joanna continued to love playing sports, and was in multiple town softball leagues. Joanna was an avid supporter of her Pateros Billygoats and Nannies. She also loved the Seattle Seahawks and Mariners. Joanna enjoyed gardening, the outdoors, reading and walking her dogs, and she loved all animals. Joanna had a terrific sense of humor and was a practical joker. Joanna was an exceptional homemaker. Her children were her life. Joanna made all family holidays and get-togethers special. She had a big heart and you could always count on her to be there when needed. She is survived by the love of her life, Mike Lambert and their children; Rachelle, Zachary and Jacob, and granddaughter Lilian. Siblings; Randy Burnett, Debbie Erickson, Sheila Rogers, Glena Stachey, Tom Burnett, Troy Burnett, Jerry Burnett and Terri Burnett. She is also survived by multiple aunts, cousins, nieces and nephews. Joanna was preceded in death by her parents and grandparents. The family would like to thank the Regency Wenatchee staff for their care of Joanna over the years. She was truly loved by all! Services will be held on Saturday, March 24that 11:00 a.m. at Barnes Chapel in Brewster. Reception and potluck to follow at the Pateros Fire Hall.

Joanna Lambert, beloved mother, grandmother, wife, daughter, sister and aunt, passed away peacefully in Wenatchee on March 14, 2018, as a result of a car accident in 2013. She was born in Brewster, WA. on March 10, 1966, the daughter of Troy... View Obituary & Service Information

The family of Joanna Lambert created this Life Tributes page to make it easy to share your memories.