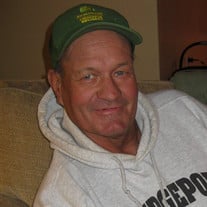 Jerry Kelvin Henton of Bridgeport passed from this life on Sunday January 1, 2017 after a difficult battle with Lewy Body Dementia. He was surrounded by his loving family. He was born on January 1, 1953 in Brewster, WA to James Raymond “Ray” and Betty Lee (Smith) Henton. He graduated from Bridgeport High School in 1971. After high school he attended Eastern Washington University and received his Bachelor’s Degree in Business Administration before returning to his hometown to work alongside his dad in the wheat fields, apple and cherry orchards in the Bridgeport and Mansfield areas. On June 28, 1980 he married Mildred “Millie” Maria Doyal, and they began their life together on the Pearl Hill wheat ranch. Together they raised three children Andrea Michelle (Henton) Pearl, Jared Ryan Henton, and Trevor James Henton. Jerry served proudly on the Bridgeport School Board from 1995 to 2003, as a member of Washington Wheat Growers Association and many years with the Douglas County District 3 Volunteer Fire Department until the time of his illness. He was an avid deer and elk hunter, enjoyed a good game of golf, and spending time with his adored grandchildren, nieces and nephews. His true passion was coaching boys and girls’ basketball, coaching AAU basketball and softball with his own children and many years thereafter in the Bridgeport High School J.V. and Varsity basketball programs. He was preceded and reunited in death by his dear father James Raymond “Ray” Henton. He is survived by his wife of 36 years, Millie Henton, his daughter Andrea (Jeff) Pearl of Chelan, son Jared (Erika Varrelman) Henton of Pateros, son Trevor (Kaelee) Henton of Chattaroy, his beloved grandchildren Addison and Kenadee Henton of Pateros, Camden and Leyton Pearl of Chelan, his mother Betty Henton of Bridgeport, brother James Henton of Hayden Lake, ID, sister Jacquelynn “Jacque” (Jerry) Workman of Bridgeport, many precious nieces and nephews, devoted in-laws Donald and Acela Doyal of Brewster and longtime, very dear friends Michael and Linda Little of Everett. We are sincerely grateful to the medical staff at Confluence Health, Central Washington Hospital, Regency Harmony House and Dr. Keith Hanson for their compassionate care of Jerry in his final days. A Celebration of Life will be held in the spring with a date yet to be determined. In Lieu of flowers the family requests that donations be made to the Alzheimer’s Association. Jerry will be greatly missed by all his family, friends and those whose lives he impacted. Arrangements by Barnes Chapel, Brewster, Washington

Jerry Kelvin Henton of Bridgeport passed from this life on Sunday January 1, 2017 after a difficult battle with Lewy Body Dementia. He was surrounded by his loving family. He was born on January 1, 1953 in Brewster, WA to James Raymond &#8220;Ray&#8221;... View Obituary & Service Information

The family of Jerry Kelvin Henton created this Life Tributes page to make it easy to share your memories.

Jerry Kelvin Henton of Bridgeport passed from this life on Sunday...