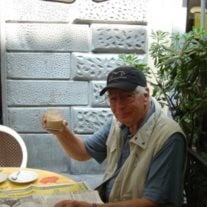 He loved all aspects of life and lived them all, both what we can see and that which is hidden Jerald “Jerry” Edward Scofield, 86, of Chelan, Washington passed away on January 11, 2014 Jerald Edward Scofield was Born, July 6, 1927, the oldest child of Gerald Soden “Bud” Scofield and Madleyn Wilhelmy Scofield. He grew up in St. Louis, Missouri where he lived until he attended Western Military Academy in Alton, Ill. Upon graduating from Western Military Academy in 1945, he joined the US Army as an MP, but as the war was winding down he was honorably discharged within the year. After being discharged he attended St. Louis University and in 1948, he married Virginia Staten from Delaware, Ohio. In their early married years the Scofields lived in and around the St. Louis area, and Ohio. In 1957, with 3 young children, they migrated West , stopping in Denver, Colorado before settling in the Puget Sound area. Jerry eventually settled his young family in Gig Harbor, WA and went to work with Howard Roland of Roland and Roland Real Estate, acquiring a taste and aptitude for Real Estate development. Within the year he started his own Brokerage Company, Scofield Realty. Under his guidance and direction, Scofield Realty eventually had 6 offices in Washington and Oregon, had 1600 investors and purchased and managed over 40,000 acres in WA, OR, British Columbia, Hawaii, New Zealand and Fiji. During this time the Scofields also had two more children. Jerry’s largest Land holdings and his greatest interests were in Chelan County, which captured his heart and imagination with it’s stark beauty. In 1965 he purchased the land to develop Riviera Chelan, known today as Chelan Hills. Jerry developed other projects in and around Chelan County such as, Icicle Island Club, The Alps, Primitive Park, and Entiat Forest Camps. Jerry owned or controlled thousands of acres in Chelan County, but his greatest joy was Bear Mountain Ranch, a property he started buying in 1960, which eventually grew to 6,000 acres . The years between the start of Scofield Realty and the 1980s brought much change to Jerry’s life and his family. There were ups and downs, airplanes, sailboats and new starts. On September 14, 1982 Jerry married Mary Pat Hoover Scofield. With her help, they began studying the uses of BMR. Over the years, BMR was studied by UW School of Landscape architecture, looked at as a possible site for vineyards, and became a Cross Country Ski Area, hosting the Centennial Winter Games in 1989. He and Mary Pat built their home at BMR in 1993. After the Tyee Fire of 1994 they bought a house in Tucson ,spending winters away from the devastation of the fire, returning in the Springs to work on the BMR project. In 2000, Jerry and Mary Pat received the Master Planned Resort permit for BMR, at the time the 2nd largest permitted resort in Washington State. He and Mary Pat developed the Golf Course at Bear Mountain with the help of Don Barth and Robert Yount, a Landscape Architect and North Cascades Bank. The head of the PGA agronomy department toured the course in 2005 and marveled that anyone could built a course without a famous name or designer yet still offering a first class golfing experience. Jerry once again pushed the market , offering predesigned homes overlooking the golf course, getting his design inspiration from Italian hill top towns he had visited on European trips. Jerry lived a very full life. He had a strong vision for what Lake Chelan could be with it’s amazing natural beauty, wildlife, and recreational possibilities. This passion is exhibited in his preservation efforts at Bear Mountain Ranch. He traveled the Northwest extensively with his amphibious planes and sailboats. His family has many fond memories of vacations, holidays and their time spent at Lake Chelan and Bear Mountain Ranch, with, his grandchildren and great-grandchildren who refer to him as,“JerBear.” Jerry is survived by his wife ,Mary Pat Hoover Scofield, his five children; Jerald Randall Scofield ( Susan), Cindy Scofield Snapp (Chris Snapp), John Patrick Scofield, Christopher Lawrence Scofield (Ellen), Libby Scofield ( Ted Johnson) also survived by six grandchildren, 2 great grandchildren, his sister Sue Scofield Hase, brother in-law Rick Hase, of Greenville, South Carolina and their three children. At Jerry’s request there will be no formal memorial service at this time. The Family will be planning a Spring Celebration of Jerry’s life here at Bear Mountain Ranch in which the entire Community of family and friends will be invited. In lieu of flowers the family requests any donations be made to The Wenatchee Humane Society , P.O. Box 55 Wenatchee, WA 98807 or Lake Chelan Community Hospital PO Box 908 Chelan WA 98816 Cards can be sent to the family c/o 6685 Bear Mt Ranch Rd., Chelan WA ,98816 The family wishes to extend an extra heartfelt thank you to All Lake Chelan Community Hospital Staff- LCCH EMS and LCCH Home Health Hospice. Dr. Montgomery/Staff at Seattle Cancer Care Dr. Phil Chapman at Swedish Seattle

He loved all aspects of life and lived them all, both what we can see and that which is hidden Jerald &#8220;Jerry&#8221; Edward Scofield, 86, of Chelan, Washington passed away on January 11, 2014 Jerald Edward Scofield was Born, July 6,... View Obituary & Service Information

The family of Jerald Edward Scofield created this Life Tributes page to make it easy to share your memories.

He loved all aspects of life and lived them all, both what we...