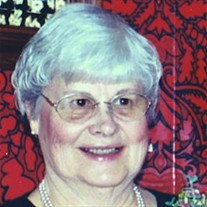 Jeannine Fay Milburn, age 87, passed away peacefully Thursday March 21, 2019 in her home of the last 16 years in Bend, Oregon surrounded by daughter Carla and son Tod. She was born February 1, 1932 in Fargo, North Dakota to Leo and Pauline McLaren, the third of four children with all living in a home built from a Sears Roebuck kit. In 1949, she graduated from Fargo Senior High then worked a short time with NW Bell. She then moved to Spokane, Washington to attend Kinman Business College where she met and married Don Milburn in May of 1952. With four children by 1960, they set down roots in Chelan, Don’s home town, where they became long time residents of both Chelan and Manson. Jeannine enjoyed spending time with her family, especially taking great pride and joy in her grandchildren. She always knew just how to make a holiday or special event fun and memorable. She also enjoyed traveling, mostly with Don trailering to favorite areas in the Arizona desert and along the Oregon coast as she had a love of the ocean and lighthouses. Trailer camping with her grandchildren at the local park in Chelan was also tremendous fun for all. Jeannine loved music particularly country music and also played piano, accordion and organ being taught piano at a young age by her mother Pauline. She loved to dance and was quite good taking to the dance floor with Don on many occasions. Jeannine was also fascinated by genealogy and spent a vast amount time and energy doing research and compiling results mostly prior to the internet. Jeannine ran a “tight ship” at home keeping everything and everyone organized and clean and took pride in her own personal appearance always finishing with a touch of lipstick. Jeannine is survived by daughters Deveral of Portland, Oregon, Carla of Homer, Alaska, Peggy of Phoenix, Arizona and son Tod(Birginia) of Bend, Oregon; five grandchildren Braydon, Andru (Amanda), Jenica (Rory), Brett and Stewart and three great grandchildren Lyam, Kia and Phinn. Jeannine was preceded in death by her husband Don, granddaughter Natasha, her parents Leo and Pauline, brothers Jay and Vince, and sister Ruth. Family, friends and others whose lives Jean touched, are invited to Graveside Services Friday, March 29, 2019 at 1pm at the Chelan Fraternal Cemetery 55 Union Valley Road, Chelan, Washington. In lieu of flowers, donations can be made to the Lake Chelan Museum and Historical Society P.O. Box 1948, Chelan, Washington 98816

Jeannine Fay Milburn, age 87, passed away peacefully Thursday March 21, 2019 in her home of the last 16 years in Bend, Oregon surrounded by daughter Carla and son Tod. She was born February 1, 1932 in Fargo, North Dakota to Leo and Pauline McLaren, the... View Obituary & Service Information

The family of Jeannine Fay Milburn created this Life Tributes page to make it easy to share your memories.