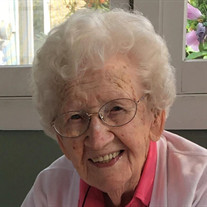 Jean Barkley of Manson, WA was called to her heavenly home on March 6, 2019 at the Lake Chelan Community Hospital. In her words, she was “97 and ½ years old.” Jean was born at home near Monmouth, Illinois on August 6, 1921, to William H. Powell & Hilda E. Carlson. After completing high school and two years of business college she married Ernest (Ernie) S. Blaine of Norwood, Illinois on September 6, 1942. Ernie was in the US Army during WWII, serving throughout Europe. After the war, Jean & Ernie settled in Monmouth, Illinois where their first two children, Pam & Rod, were born. Ernie tragically died on July 18, 1952. In 1957 Jean met LaRue Barkley while he was visiting family in Illinois. Jean moved to Manson, WA with her two children and married LaRue on June 15, 1957. Dad was an orchardist, raising apples, pears, and cherries in Manson. In 1958, Cindy was born. Mom and Dad raised their family on Lakeshore Drive. Dad sold the orchard and retired in 1982 and they began an new phase in their lives, traveling. Together they traveled the world. Whether hiking with Courtneys or on a cruise ship, they experienced travel together for over 20 years. Mom would say, “LaRue, would you like to see China?” Dad would always say, “Jean, my bags are packed”. After Dad passed away in 1996, Mom continued to live on Lakeshore Drive overlooking the lake. She used to love to watch for the Lady of the Lake as it traveled up & down lake. These are the basic facts of Mom’s life but they only hint at her full measure. To understand who she was you have to understand what is was like to live out of her magnificent garden and her hours of canning to provide vegetables and fruits throughout the year for her family. As any gardener knows, to succeed you need to pull the weeds. Mom led a group of volunteers who also pulled weeds throughout the main streets of Manson and the Church grounds, simply to keep their community neat and tidy. Come harvest you would find her working beside Dad in the orchard. Mom was best known around the Valley for her exemplary skills on the piano. Whether playing at the Kiwanis, at church, or impromptu events, she was always willing to share her talent. Mom was also one of the Gray Ladies who would volunteer hours of service at the local hospital. Mom volunteered not only her time, but her blood. She gave over 8 gallons of blood over the years. Mom loved her Manson United Methodist Church. She was a consummate volunteer for everything the church did and stood for in her community. And when you attend her Celebration of Life on Saturday, March 16, you will walk through those red doors at the church. Yes, Mom made that happen. Mom was the Matriarch of her family, and at 97 the Matriarch of her community. Mom was preceded in death by husbands Ernie Blaine and LaRue Barkley, parents William H. Powell and Hilda E. Powell, brother Harland W. Powell, sister, Ila Mae Powell, and son-in-law Jim Sundberg. Surviving family are daughter Pam Hale (Ron), son Rod Barkley (Julie), daughter Cindy Sundberg and nephew Fred Barkley (Kristina). She is also survived by eight grandchildren: Jason Rupert, Stacey Monson (Pat), Jensina Sundberg, David Barkley (Diana), Jeff (Barkley) Chadwick (Kimberly), Brittany Secrist (Spencer), Alex Gustin and Matt Gustin. She also has four great grandchildren: Davis LaRue and Marley Jean Monson, Madelyn and Maegan Barkley, and numerous nieces and nephews. Visitation will be at the Precht Rose Chapel in Chelan on Thursday, March 14 from 5:00 pm to 7:00 pm. A Private Internment with be at the Riverview Cemetery in Chelan on Friday, March 15 at 12:00 Noon. A Celebration of Mom’s Life will be held at the Manson United Methodist Church in Manson Saturday, March 16 at 3:00 pm.. A reception with the family will immediately follow. The family wants to thank Mom’s four caregivers, Jill, Donna, Nicole and Cecilia. Mom would always refer to them saying “her friends visited today.” We would also like to thank the Hospital staff at Lake Chelan Community Hospital for their patience and kindness, the local Emergency Medical Teams who were always there when needed and her longtime physician, Dr. Harberd for his gentleness and skill. For those who wish to donate in the memory of Mom, memorial gifts may be donated to Manson United Methodist Church.

The family of Jean Barkley created this Life Tributes page to make it easy to share your memories.

Jean Barkley of Manson, WA was called to her heavenly home on...