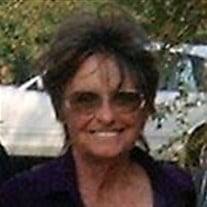 Janice Lynn Fitzhugh, 72, passed away peacefully February 26, 2015, in Spokane, WA. surrounded by her children, grandchildren and one sister. Janice was born June 29, 1942 in Sacramento, CA to Earl and June Sweaney Galbraith. Janice was the third of their seven children. The family moved back to Brewster, where Janice grew up, going to school in Brewster and also Bridgeport where she graduated high school. On July 29, 1960, Janice married her soulmate and the love of her life, Norman Fitzhugh. They lived in several different towns in Washington throughout their married life, but Brewster was the place they called home, the place they raised their two children. Janice drove a school bus many years for the Brewster School District. Each child on her bus was important to her and she loved them all, as they did her. Through the years, Janice and Norman would lend a helping hand to anyone who needed it. There were several children they opened the doors of their home for, and those children would become theirs; raising them, teaching them and most of all loving them. Norman worked for the WA State Highway Dept. and one of their moves was to Goldendale, WA. Janice then went to work for Pavement Surface Control running a flagging crew for them. Janice worked several years for them and in many different towns throughout the state. When Janice and Norman both retired, they bought a little place in Bouse, AZ, spending their winters there and returning to Brewster in the spring where they had a small apple orchard on their place. Janice was a wonderful, strong, and loving person. She will be missed by so many. Janice was preceded in death by her husband, Norman, her grandparents, Ed and Rachel Sweaney and Will and Floy Galbraith. Also her parents, Earl and June Galbraith, her two brothers, Dan and Marvin Galbraith and one sister Ann Kiedrowski. She is survived by her children, Brad and Darleen Fitzhugh of Coulee Dam, WA, her daughter Tammy Spicer of Spokane, WA, her grandchildren: Josh and Heather Fitzhugh of Royal City, WA, Stephanie and Chad Morrison of Brewster, Jessica and Will Bunting of Omak, Dacia and James Stevenson of Spokane, WA, Taylor Spicer of Spokane, WA and 10 great-grandchildren. Three sisters: Vivian Nalls of Camden, AR, Carol and Leon Byrd of Ephrata, WA, Verda and Gene Olsen of Brewster and many nieces, nephews, and cousins. There will be a family viewing on Friday, March 6, 2015 from 2-3 and a public viewing from 3-6 at Barnes Chapel. Services are at 12 on Saturday, March 7, 2015 at the Chapel, followed by a luncheon at the Log Church's Glessner Annex.

Janice Lynn Fitzhugh, 72, passed away peacefully February 26, 2015, in Spokane, WA. surrounded by her children, grandchildren and one sister. Janice was born June 29, 1942 in Sacramento, CA to Earl and June Sweaney Galbraith. Janice was the... View Obituary & Service Information

The family of Janice L. Fitzhugh created this Life Tributes page to make it easy to share your memories.