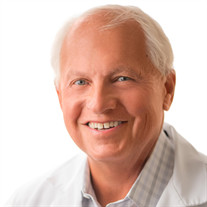 Dr. James W. Lamberton, D.O. died at the age of 67, Sunday morning, January 28, 2018 in his home of Brewster, Washington after a courageous battle with cancer. Jim leaves behind a lifelong legacy of kindness and generosity and was a loving husband, father, grandfather, brother and friend. Jim approached his life with optimism and faith. He had a smile that could light up a room. Jim thoroughly enjoyed his work as an Orthopedic Surgeon, serving the Okanogan County for nearly 30 years. Jim’s interests were broad. He enjoyed traveling, hiking in the North Cascades, playing tennis with his wife at the WRAC and spending time with friends and family at the lake. He also loved music, and especially playing his trombone. Jim took opportunities to do short term medical missionary work in Borneo, Peru and Jamaica. He was a lifelong member of the Seventh-Day-Adventist church. Jim was devoted to teaching others about the Bible through his Bible study class. Jim was born in Portland, Oregon on March 11,1950 to Ned and Verna Lamberton. Jim grew up in Washington state, he graduated from high school at Upper Columbia Academy, where he met and later married his wife of 47 years, Judy. He then graduated from Warner Pacific College in Portland, Oregon. He received his medical degree from Kansas City University of Medicine and Biosciences. Jim leaves behind many broken hearts to those who loved and knew him. He was committed to his family as well as his community and found joy in serving others. Even during his final days, he never gave up his optimistic attitude. He did not let cancer take his spirit. He will be greatly missed by his family including his wife Judy, son Greg (Tiffany) of Tacoma, daughter Jill (Jon) of Kirkland, brother Tom (Helen) and sister Ruth, as well as his four grand children; Alivia, Noah, Drew and Cole. A Celebration of Life service will be held on March 10, 2018, at 2:00 PM in the gymnasium at the Brewster High School, 503 S. 7th Street, Brewster Wa 98812. Memorials may be made to the Pancreatic Cancer Action Network or Brewster Adventist Christian School

Dr. James W. Lamberton, D.O. died at the age of 67, Sunday morning, January 28, 2018 in his home of Brewster, Washington after a courageous battle with cancer. Jim leaves behind a lifelong legacy of kindness and generosity and was a loving... View Obituary & Service Information

The family of James W Lamberton D.O. created this Life Tributes page to make it easy to share your memories.